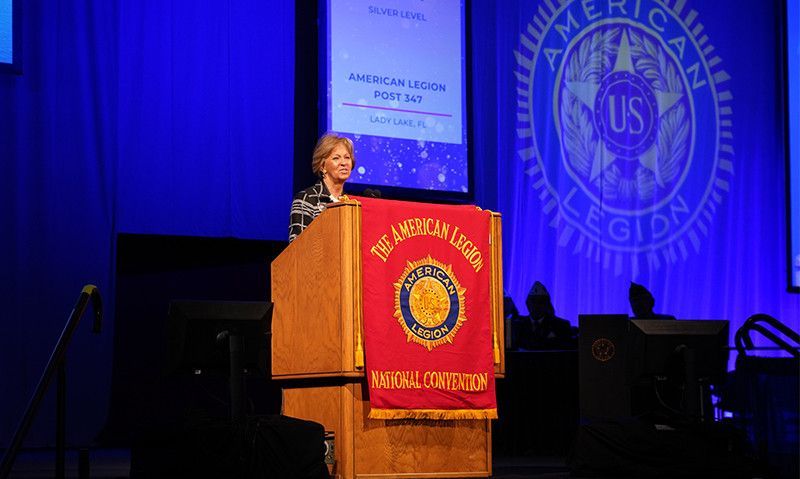 The Military Women’s Memorial and Foundation give meaning to women veterans who have served the U.S., its president told American Legion members at its annual convention on Sept. 1.

“I was a soldier and I didn’t feel like I needed a place for women only,” said Military Women’s Memorial President Phyllis J. Wilson. “I was wrong. America still does not quite get that there are three million women that have defended this nation. We get to tell their stories individually and collectively.”

The Military Women’s Memorial, located at the gates of Arlington National Cemetery, was dedicated on Oct. 18, 1997, with approximately 40,000 people present.

“There were tens upon tens of thousands of people there, all helping to give recognition to the immensity of what this memorial was and will be,” one veteran noted.

The memorial honors the service and legacy of the 3 million women who have served in the Armed Forces beginning with the Revolutionary War. It is the only historical repository documenting the service of military women and features an education center, interactive exhibitions, a collection of military women’s stories, and hosts programs and events for all generations.

“The American Legion and Auxiliary have been fantastic friends to the foundation, having shared over the last 30 years, more than $650,000 to the memorial,” Wilson said.

In a video, Wilma L. Vaught, president emeritus of the Military Women’s Memorial, said a quote from an Army nurse who served in World War II epitomized the meaning of the memorial.

“Let the generations know that women in uniform also guaranteed our freedom, that our resolve was just as great as the brave men who stood among us,” she said.

The memorial has an interactive database that records and preserves the names, service information, photographs and experiences of each registered servicewoman. Wilson announced plans to expand and modernize the museum to make it more interactive for the generations to come.

“We have 303,000 incredible stories in there,” said Wilson. “But that is just 10 percent of the stories that should be in that database. Each and every one of our stories needs to be told because someday, if you don’t claim that rightful place in history, it will fall to the wayside.”

Each generation of the military has had women trailblazers who paved the way for the women who followed. Deborah Sampson became a hero of the American Revolution when she disguised herself as a man in order to join the Patriot forces. Tens of thousands of women served in both world wars, but legislation formally allowing women into the military wasn’t passed until 1948.

“When I served in the Navy, we weren’t even allowed to vote,” recalled a World War I veteran at the dedication ceremony in 1997.

Today, women can serve in every branch of service, at every rank and in every career field.

If you are a woman who served in the U.S. military, you can register your story for the Military Women’s Memorial by visiting womensmemorial.org/make-herstory/.

Owning the libs: Knox GOP sends in the clowns

A unique time in American history to stand for life