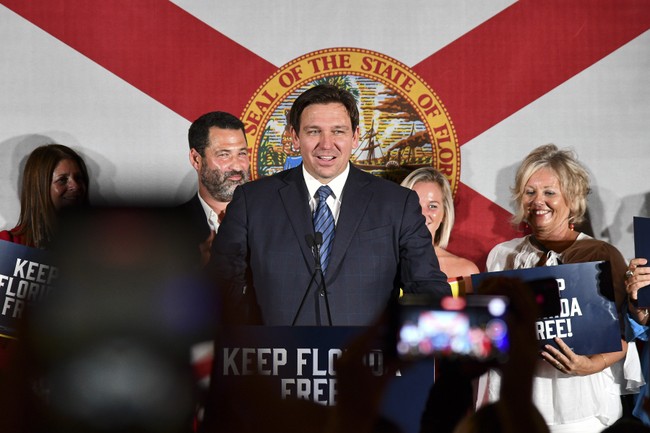 After his decisive reelection win as governor of Florida earlier this month that saw support for Republicans surge in the Sunshine State, Ron DeSantis shared what he’s grateful for in a Thanksgiving message released this week in which he wishes his state’s residents a happy Turkey Day.

“Two hundred and thirty-three years ago, President George Washington issued a proclamation for ‘a day of public thanksgiving and prayer’ for the American people to ‘acknowledge with grateful hearts the many signal favors of Almighty God especially by affording them an opportunity peaceably to establish a form of government for their safety and happiness,'” DeSantis reminded of the holiday’s origins. Those origins, of course, are the kind of thing that leftist Democrats would prefer to ignore or outright erase given their war on America’s founders and the notion that America was founded with the understanding that divine providence guided its beginning.

“We’re blessed to be Americans and to live in the free state of Florida,” DeSantis continued. “While our country has faced so many problems in recent years, we have the capacity to solve these problems and to bring about brighter days,” he continued, echoing the optimistic messages his campaign used throughout his successful reelection campaign.

Indeed, Florida’s residents, and most Americans, have faced their share of hardships, from COVID-19 to inflated costs to hurricanes. But DeSantis, unlike other leaders, successfully led the Sunshine State through the pandemic without unnecessarily destroying livelihoods. He’s worked to lower taxes for Floridians while increasing support for those who’ve fallen on tough times. And he denied the dour expectations Democrats and the media set for him when Hurricane Ian swept across Florida earlier this fall. Those successes in Florida, including 30 consecutive months of job growth, are just a few of the indications that “brighter days” DeSantis mentioned remain ahead.

“The First Lady and I have much to be thankful for: her health; our three children, Madison, Mason, and Mamie; and the trust Floridians have placed in me and my administration to continue our efforts,” DeSantis explained.

As Townhall reported in the last year, First Lady Casey DeSantis underwent treatment for breast cancer earlier this year, with Governor DeSantis announcing in March that his wife had completed “both treatment and surgery for breast cancer” and “considered cancer-free.”

By May, Casey DeSantis returned triumphantly to the 2022 midterm campaign trail. “I don’t know if this sounds very first lady-like, but damn it feels good to be here,” she said when she joined the governor for a dinner at The Villages.

With his reelection win earlier in November, DeSantis proved again that he had indeed earned Floridians’ trust through his work to push back on woke leftist policies and, despite what the mainstream media and national Democrats said about him in their smears.

“We will Keep Florida Free,” DeSantis pledged at the end of his Thanksgiving message, repeating another of his 2022 campaign’s themes. For those who appreciate Florida’s freedom, there’s little doubt they’re thankful this year that DeSantis will continue leading the state and demonstrating that conservative governance works.