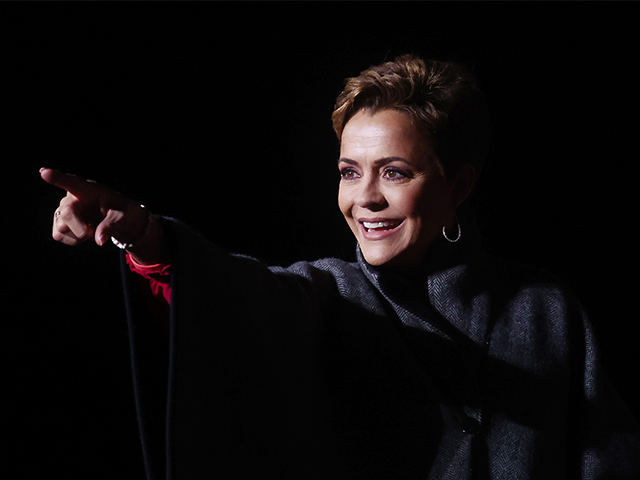 Kari Lake, the Republican gubernatorial nominee in Arizona, blasted a reporter who asked if former President Donald Trump was “dividing the country” “by falsely telling people he won” the 2020 election.

The question came during Lake’s press conference Thursday following President Joe Biden’s speech, in which he called MAGA Republicans a threat to America.

“You say you feel like Joe Biden is dividing the country, but do you feel like Donald Trump is doing the same by falsely telling people he won that election when he lost it?” the reporter asked.

This is one of the best answers to the media’s 2020 election questions I’ve heard. pic.twitter.com/yYni3wwjhi

“How does that divide the country? Questioning an election where there are obviously problems is dividing the country? Since when can we not ask questions about our elections?” Lake, a former Fox 10 phoenix anchor, asked the reporter. She continued:

We have freedom of speech in this country and you of all people should appreciate that. You’re supposedly a journalist, you should appreciate that. So, I don’t see how asking question about an election where there are many problems is dividing a country. What I do see as dividing a country is shutting people down, censoring people, canceling people, trying to destroy people’s lives when they do have questions.

Lake added that “we’re going to save” the “constitution, and we’re going to bring back freedom of speech, and maybe someday you will thank us for that.”

Prior to her spar with the journalist, Lake responded to Biden’s speech, dubbing it “the most absurd, frankly obscene, address [she’s] ever seen a president give to the American people.”

We see an exceptional country that you are bringing to its knees.

“What I saw was somebody who’s trying to divide this country,” adding that Biden “carries in his heart a great deal of disdain for a whole lot of really good American people.”

She went on to outline that the America First agenda “is about finding solutions to the problems that we’ve had for many, many years, and we saw that with president Trump when he came into office as an outsider.”

“Washington, DC, never wants an outsider because it ruins their political agenda when somebody comes in from the outside. And we’re seeing this all over right now,” she went on to say. Lake asserted that the American people are deeply dissatisfied with the Biden Administration, and they are getting involved in politics to create change.

“What’s happening is we’re seeing American citizens, moms and dads, stepping forward running for office, and Joe Biden is threatened by that,” she detailed before taking aim at her general election opponent, Arizona’s Democrat Secretary of State Katie Hobbs.

“And people like Katie Hobbs, people who are career politicians, are threatened by real individuals who are stepping forward, getting off the sidelines, getting in the game. And they’re saying, ‘you know what, I’m going to run. I’m going to help my fellow countrymen,’” she added.