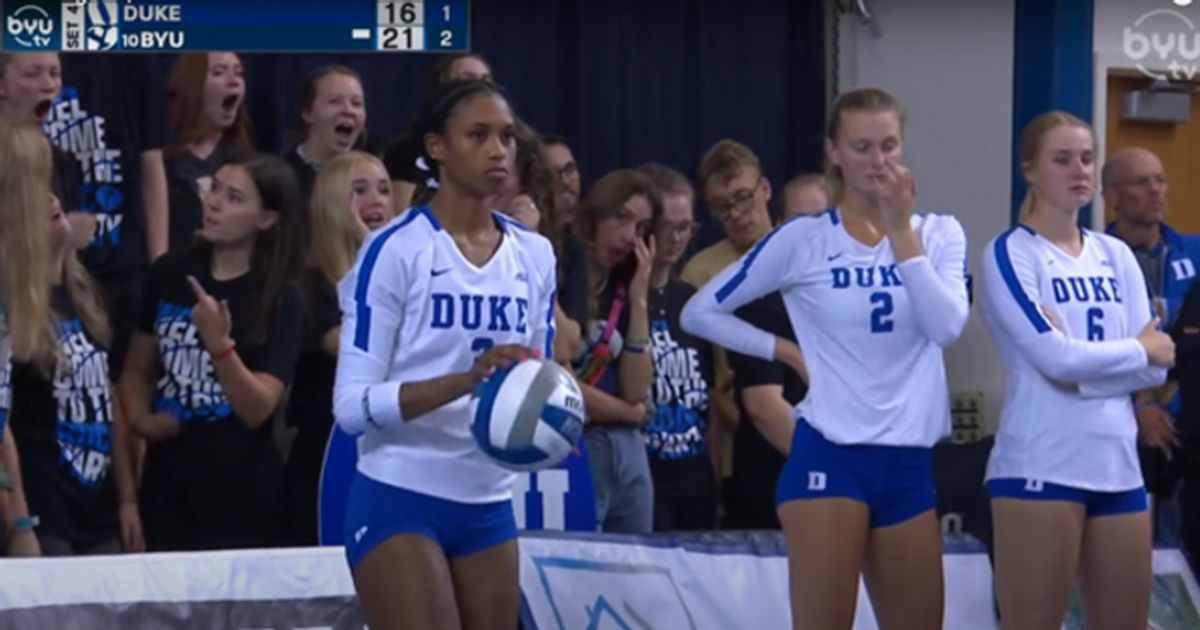 By now, the story has gone all around the world, as such stories tend to do. As PJM’s Rick Moran noted when the story broke, it all started at “a women’s volleyball game played at BYU in Utah where a black Duke University player alleges that fans hurled racist taunts at her.” But as is so often the case with such incidents, “almost immediately, the story that Rachel Richardson, the only black starter on the Duke volleyball team, told began to fall apart.”


And now it has come to light that Richardson’s godmother, who was the first to tell the story to the world, has a history of spreading hate hoaxes and hate-filled anti-white rhetoric. Color me shocked: this story turns out to be yet another Leftist attempt to shore up its sagging narrative of pandemic racism in the United States.

Rachel Richardson’s godmother is named Lesa Pamplin. She is a lawyer in Fort Worth, Texas, where, according to the Post Millennial, she is running for a seat as circuit court judge. Having a goddaughter who has been a victim of high-profile racist abuse is ballot-box gold for Leftists in this age of the glorification of victimhood, and it was Pamplin who broke the story of Richardson’s ordeal, tweeting (Pamplin’s tweets are now protected): “My Goddaughter is the only Black starter for Dukes volleyball team. While playing yesterday, she was called a n****r every time she served. She was threatened by a white male that told her to watch her back going to the team bus. A police officer had to be put by their bench.”

OutKick ran with Pamplin’s claims, and then, reports the Post Millennial, “Backseat Directors host André Hutchens posted it along with a long Twitter thread detailing the hate hoax. While NBC, CNN, ESPN, USA Today, and others, ran with the story as absolute truth.” Unfortunately for Richardson and her candidate godmother, however, Pamplin’s claim “was investigated and disproven within 72 hours.”


On August 30, BYU’s Cougar Chronicle ran a comprehensive investigation concluding the event did not happen. Further, Salt Lake Tribune released its report saying there was no racial slur and separate reports from the BYU Campus and BYU athletic department substantiated that the word was not said. Even on Wednesday, days after the whole thing had exploded, USA Today ran an opinion piece entitled, “Right-wing conspiracy theory involving Duke volleyball player is absurd.” Mike Freeman, the paper’s “Race and Inequality Editor—Sports,” wrote: “I believe Rachel Richardson. I don’t believe anyone prematurely backed her. I don’t think she’s lying. I think she’s telling the truth.” Sure, Mike, now tell us about Bigfoot and the Loch Ness Monster.

Related: Is the Story About a Duke Volleyball Player Being a Target of Racist Taunts at BYU True?

Neither Freeman nor any of the others who ran with Richardson’s story as true have noted that Lesa Pamplin has been in this situation before. Back in 2009, the Fort Worth Star-Telegram reported that Pamplin “wanted a Tarrant County district judge taken off her cases for being ‘racist.’” Richardson’s godmother accused Tarrant County State District Judge Elizabeth Berry of “sending a racist e-mail to her court reporter in which she called another court reporter a racial epithet.” Pamplin’s accusations went before a state district judge, who heard testimony on the matter for “nearly a full day.”


After all this, “everyone agreed that the e-mail was a fake, it did not come from Berry’s computer, and she didn’t have anything to do with the document.” Pamplin issued a statement agreeing with the judgment: “As an African-American attorney, I had a duty to my clients to make sure that it is not true….The e-mail is a fake, and I would like to withdraw my motion to recuse.” It does not appear, however, that Pamplin issued this statement out of an overflow of concern for fairness and straight dealing. There is also considerable evidence that Pamplin is herself quite racist.

The Post Millennial published a number of Pamplin’s tweets, making it abundantly clear why she made her account private. Pamplin has tweeted: “Creepy a** crackers are scary”; “White women & men always disappoint”; “You poor white motherf*ckers can’t take it”; and “Would expect nothing less than a pale white chic. Sit down Becky.” Also: “Why does CNN constantly interview these dumb a** white women?” “Ain’t watching this Cracker Barrel bullsh*t.” “You damn straight about that. Whypipoe [white people] being white.” “Judge [Eric V.] Moyé ain’t playing with these crackers.”

Should NBC, CNN, ESPN, USA Today, and the others who ran with Richardson’s false claim have considered the source and checked into Pamplin’s background before running with her accusation? Of course. But that would have required that they be journalists, rather than propagandists seeking to reinforce a narrative. That ship sailed a long time ago.

19 German Christmas Markets to Plan a Trip Around