Vladimir Putin to Address Russia; Annexation of Ukraine Provinces and Mobilization Seem to Be on the Table – RedState


Russian President Vladimir Putin was scheduled to address Russia, and the world, on his war in Ukraine at 4 p.m. EDT. He cancelled the speech.

Sergei Markov says Putin’s address has been postponed until tomorrowhttps://t.co/MzEZC2aICo

Had it taken place, it would be the first such address since Putin ordered the invasion of Ukraine 208 days ago, deeming it a Special Military Operation. Making the speech more interesting is that Defense Minister Sergei Shoigu, the Plywood Marshal himself (so called because he made his fortune as a corrupt supplier of building materials to the Russian government), was also supposed to speak.

We don’t know what he would have said, but some of the actions on the ground in Ukraine give hints as to what may be on the table.

Two Ukrainian provinces, or oblasts, have been under Russian control since the first Russian invasion of Ukraine in 2014. They have since mutated into the entities called the Luhansk People’s Republic (LPR) and Donetsk People’s Republic (DPR). These Potemkin republics declared themselves independent in secession referendums held in May 2014 and were recognized by Russia, North Korea, and Syria on February 21, 2022. See Vladimir Putin Runs the Table in Ukraine and Shows Joe Biden to Be a Feckless and Unreliable Security Partner and Vladimir Putin Orders Russian Peacekeeping Troops Into Eastern Ukraine — and I’ll freely admit that I did not see the invasion coming and I thought this was Putin’s endgame.

Since the invasion, substantial parts of two other oblasts, Kherson and Zaporizhzhia, have come under Russian occupation. Russia’s plan seemed to be to seize the real estate, call for a referendum on annexation, much like it did with Crimea, and lock in its wins; Russia Is Creating Facts on the Ground to Support Annexing Eastern Ukraine.

In the past couple of weeks, the situation has changed markedly. Four months ago, it looked like Russia had set its sights on occupying the entirety of the historical borders of Luhansk and Donetsk and establishing a land bridge from Russia to Moldova (Putin Decides to Widen the War With Ukraine to Achieve His Objectives. That goal was reached in Luhansk. Then the Ukrainian counteroffensive struck, erasing most of Russia’s gains in the summer fighting, including part of Luhansk. See Putin’s War, Week 28. The Sitzkrieg Goes Blitzkrieg as Ukraine’s Army Moves 50 Kilometers in Two Days and Ukraine’s Offensive Continues, Russia Shows No Sign of Being Able to Stop It, Intriguing Rumors Abound.

Right now, it is well within the realm of likelihood that both Luhansk and Donetsk will be liberated that the two puppet regimes extinguished. A slow-motion offensive is taking place focused on starving into submission or retreat the 10,000 Russian troops north of the Dnieper River. In Kherson, things looked grim enough that a projected annexation referendum was put on hold. This is from TASS.

A week into Ukraine’s offensive to retake Kherson, Russian-appointed occupation officials say they’re “pausing” work on a referendum to join Russia “because of the security situation.”https://t.co/GTSYTvoGFx

Overnight, everything changed. All four provinces under Russian occupation announced that a referendum on annexation to Russia would take place between September 23-27. With no planning. As combat is raging. Zaporizhzhia is not mentioned in the Reuters link; here is the TASS link. Russia is also inviting unnamed friendly countries to send observers, as the only nations recognizing the theft of Crimea are Afghanistan, Cuba, North Korea, Kyrgyzstan, Nicaragua, Sudan, Syria, and Zimbabwe; we can have no more doubts about the outcome than we have about the 2020 election in Georgia.

The referendum in Russia-occupied Zaporizhzhia Oblast of Ukraine on joining the Russian Federation will also be held on September 23-27, the head of the Russian occupation authorities of the region announced.

The best interpretation of this is that Putin thinks that declaring the war zone to be Russian territory, he can force a stop to the Ukrainian offenses in Kharkiv and Kherson. He can spin this as a Ukrainian invasion of Russian territory, legitimize targeting NATO supply lines supporting Ukraine (Putin’s Speech to Russian ‘Lawmakers’ Threatens ‘Lightning Fast Strikes’ With Mystery Weapons Against Nations Supplying Ukraine With Weapons), intimidate Germany and France into ceasing defensive cooperation with Ukraine, and, hell, who knows, maybe use a tactical nuclear weapon on himself just to show us he means business.

I’m sure we’ll all read from the usual suspects about Putin, the Master Strategist playing Five Dimensional Chess with a mirror and creating an asymmetric conflict where he reigns supreme. My gut feeling is that it isn’t going to work and that fewer countries will recognize these referendums than recognized the independence of the LPR and DPR.

Just FYI ❗
The so-called “referendums” that Ruzzia will hold in eastern Ukraine will never be accepted by Turkey. This was stated by the country’s president, Recep Tayyip Erdogan, in New York, on the sidelines of the UN General Assembly session. pic.twitter.com/wMTvRrTOO8

Russia is suffering from a manpower shortage due to how Putin decided to structure his invasion of Ukraine. By calling it a “Special Military Operation (SMO),” he avoided unpleasant economic impacts on Russia. He also handcuffed himself to some of Russia’s arcane laws. Conscripts, for instance, can’t be used in the SMO. Contract soldiers can resign at any time because a war is not going on, and they are.

Against the backdrop of new laws in 🇷🇺 being passed to deal with refuseniks, a video surfaced yesterday of what appears to be stacks of resignation letters to the commander of the 5th Separate Guards Tank Brigade.

Records of so-called “refuseniks” are stamped to show they refused to fight, but they don’t seem to care.

Just a few days ago, the head of Russia’s mercenary Wagner Group was videoed inside a Russian prison recruiting men for service in Ukraine.

We took a closer look at the video in which a man, who strongly resembles a Putin associate, Yevgeny Prigozhin, promises inmates release from prison in return for a six-month combat tour in Russia’s war against Ukraine: https://t.co/ICFIQ8WTVi pic.twitter.com/CUEXZSjsrN

The lower house of the Russian Duma has sort of telegraphed what might happen by passing a new law reforming military service rules. Some of it, like making surrender to the enemy a felony, is straight out of Stalin’s 1941 playbook. 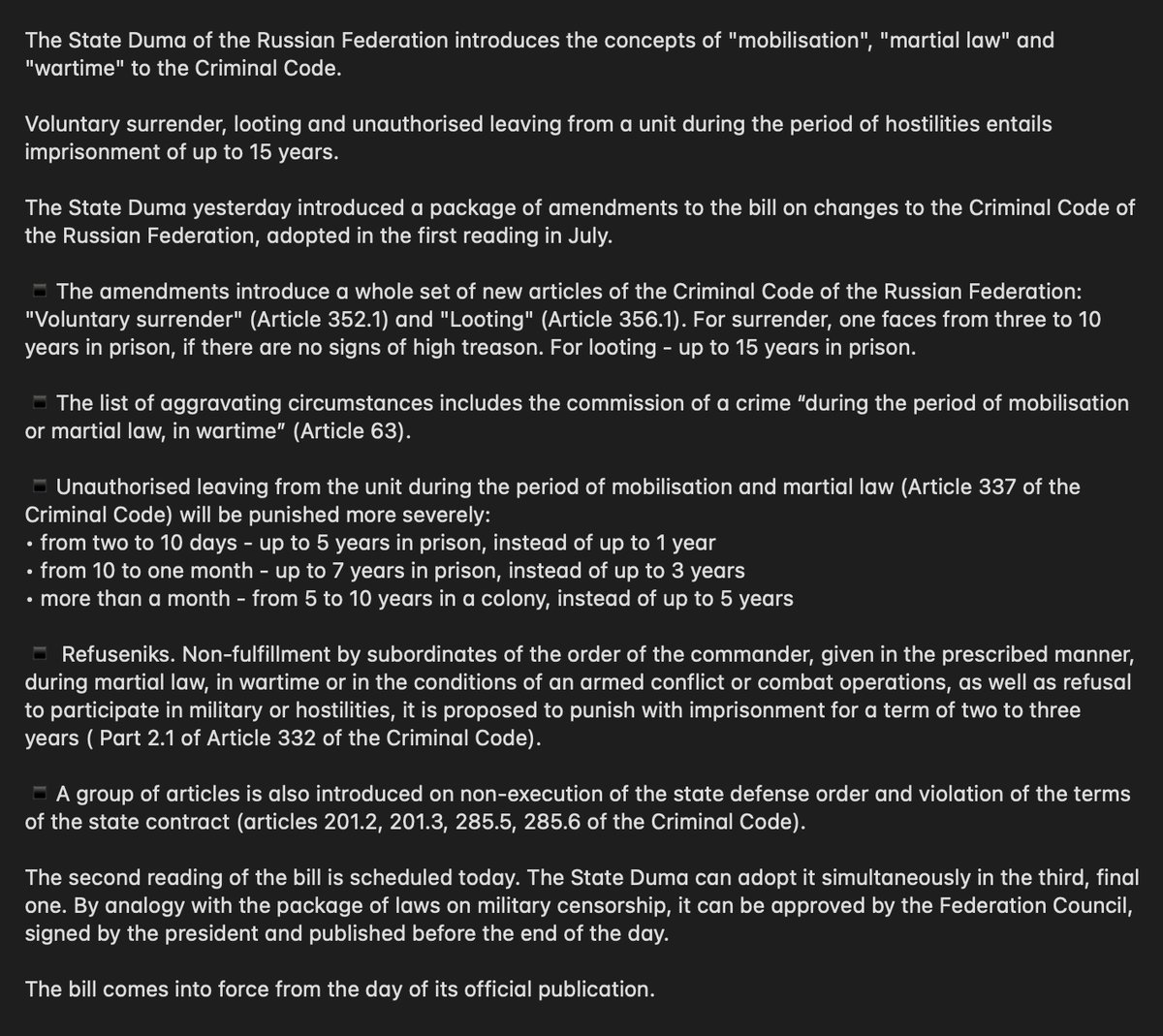 The Russian stock market is not taking the speech all that well.

Mobilization will be much more a painful PR stunt than anything else. To convert manpower to combat power, the troops have to be clothed and equipped. The LNR conscript forces are being armed with M1891 Moisin-Nagant bolt-action rifles (Russian Brigade Gets Annihilated in Failed River Crossing Attempt and Other News From Putin’s War). They also have to be trained.

Because the Russian Army doesn’t have a professional corps of noncommissioned officers, training and combat leadership are the responsibility of the officer corps. Ukraine has been a meatgrinder for the Russian officer corps. Nearly 1200 have been killed, as verified by funeral notices. The actual total is undoubtedly higher.

1 190 killed Russian officers as of 20 September.
Minimum confirmed losses. Confirmations are made via publicly available data, such as funeral notices, obituaries or Russian news sites. pic.twitter.com/BvwF3OBXYp

Even though Putin canceled his speech,  it seems inevitable that he has some very tough decisions to make. No matter what he says or when he says it, one thing seems inevitable. The war that began on February 24 has become a different kind of war entirely.

[Editor’s note: I apologize for the headline. The post was written in anticipation of the speech. I tried to correct it as much as possible to reflect the cancellation but I forgot about the headline.]

DNC Had Twitter Go After James Woods, According to Files – RedState