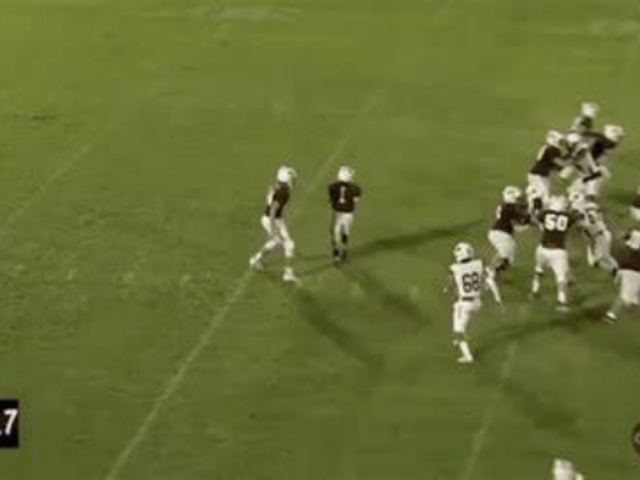 A community in desperate need of something to cheer for got precisely that on Friday night as Uvalde High School pulled off a miraculous win in their first home game since the tragic shooting at Robb Elementary that left 19 children and two teachers dead.

Those in attendance observed a 21-second moment of silence before the game to honor the memories of those that lost their lives on that tragic day in May.

Uvalde and C.C. Winn High School were locked in a close contest, tied 28-28 with only 36 seconds remaining. That’s when Uvalde’s got loose and scampered 51 yards down the field to get the ball to C.C. Winn’s 10-yard line. With only 17 seconds left on the clock, Uvalde’s senior wideout Devon Franklin made a spectacular one-handed grab in the corner of the end zone, giving Uvalde the lead and the win.

This is absolute goosebumps stuff:

It happened thanks to a miraculous 51-yard run with 36 seconds to go.
And then a go-ahead, one-handed TD catch with 12 seconds left.
Have to love sports.#txhsfb @wfaa pic.twitter.com/AXSs1zakUu

Uvalde’s two wins to open the season (they won on the road in their season opener) already matches their win total from the previous year. The symbolism of that first victory, a game Uvalde won after scoring 21 points, was not lost on Eluterio Rendon, the father of a Uvalde senior linebacker Justyn Rendon, and the father of a child who survived the shooting at Robb Elementary.

“It was just a sign that the 21 angels are looking down at this community, and saying that they’re here, that they’re still present, and that they will remain present,” the elder Rendon told ABC News. “So that was a pretty, pretty special moment.”