Utah Boy Out of Hospital After Being Submerged over 10 Minutes 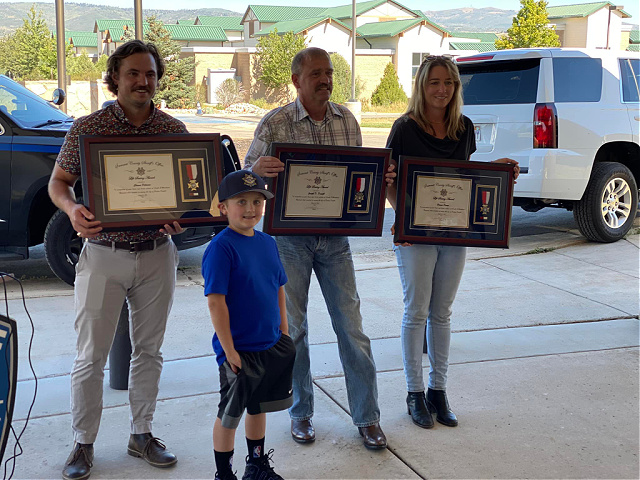 A nine-year-old Utah boy returned home from the hospital after nearly escaping death when he was trapped in a truck submerged under water for over ten minutes.

On August 22, Paxton Knight’s family was loading up kayaks in the truck while Paxton, 9, waited inside with his two-year-old sister, Briana, and another nine-year-old boy.

The truck was parked on a boat ramp at Smith and Morehouse reservoir in Summit County, Utah.

At some point, disaster struck as the vehicle started rolling into the water. Brandon Haskell was able to save Briana, his granddaughter, while the other nine-year-old was able to escape, but Paxton was trapped, Breitbart News noted.

As the truck rolled into the water, with the family screaming for help, a nearby kayaker, Joe Donnell, rushed to the scene and realized the gravity of the situation.

Donnell, a former park ranger, acted fast by leaving his kayak and diving into the reservoir to find the nine-year-old. He dove in and resurfaced multiple times, trying to locate him.

On approximately the seventh attempt of diving in, Donnell found Paxton and brought the unconscious boy to shore.

Two other good Samaritans, Fionna Pierce and Chance Peterson, were also nearby and helped keep the boy alive by performing CPR, KSL.com reported.

Paxton had been underwater for ten minutes, according to the Summit County Sheriff’s Office.

Brian Bevacqua, an emergency technician who arrived on the scene, praised Pierce and Peterson’s quality of CPR.

“They don’t go that way very often,” Bevacqua said. “For being underwater for as long as he was, it’s honestly a miracle.”

Paxton was airlifted to Primary Children’s Hospital in Salt Lake City and was placed in the ICU on life support. He was described as being “in extremely critical condition” by Summit County Sheriff Justin Martinez on Monday evening.

Despite the grim outlook, Paxton slowly showed signs of recovery as he was already responding to doctors and family members two days later, according to his aunt.

After nearly a week and a half of recovering, Paxton was released from the hospital on Thursday in good condition.

His grandmother, Rondi Noerring, noted that all good Samaritans being at the right place at the right time gave Paxton a chance to beat the odds.

“I think there is a reason for everything. For people to be where they’re supposed to be is just a miracle. If they weren’t there, he probably wouldn’t have survived this,” Noerring told KSL.com.

“It took every single one of them and their part to help him survive. I think it was all meant to be, I mean, every little part of the story is just amazing. Just a miracle,” she added.

On Saturday, all three good Samaritans — Donnell, Pierce, and Peterson — who saved Paxton’s life were honored by the Summit County Sheriff’s Office with the Life Saving Award for their heroism. Haskell was also recognized for saving his granddaughter Briana’s life, KSL noted.

Paxton was in attendance at the event and got the chance to meet his heroes.

The Clear and Present Danger of One Voice

Republicans want greater oversight for weapon shipments to Ukraine — only 10% of U.S. weapons have been inspected in person

IRS is coming after your Venmo, PayPal payments over $600