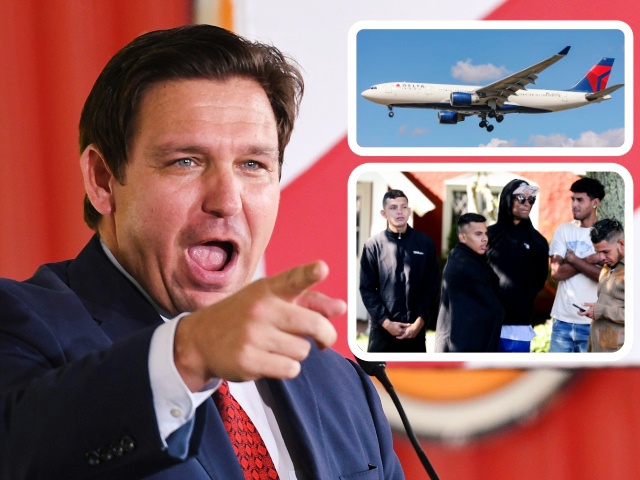 A Democrat sheriff in Texas has opened a criminal investigation of Republican Florida Gov. Ron DeSantis for transporting 50 migrants to the wealthy liberal enclave of Martha’s Vineyard last week.

Bexar County Sheriff Javier Salazar said he will be seeking to determine if the DeSantis administration “lured” the migrants onto the plane under “false pretenses.”

“Here we have 48 people that are already on hard times. They are here legally in our country at that point. I believe that they were preyed upon. Somebody came from out of state, preyed upon these people, lured them with promises of a better life, which is absolutely what they were looking for,” Salazar said in a video message to announce the probe.

Salazar previously lamented to MSNBC this past July that President Joe Biden needs to do more to aid in the ongoing border crisis.

“Mr. President, we need your help. With all due respect, the perception here, what I’ve seen in talking to other law enforcement leaders in my precious state of Texas is the perception is that there’s been a complete absence from Washington, DC. Now, I know that you’ve got a whole world to protect and serve. However, here down in Texas, we need your help,” he said.

Salazar added he will be working closely with lawyers and immigrant advocacy groups.

Immediately after the migrants arrived on Martha’s Vineyard, Democrats began pushing the absurd talking point that DeSantis “kidnapped” the migrants in order to use them as political pawns. Democrat California Gov. Gavin Newsom even called on Attorney General Merrick Garland to investigate potential wrongdoing.

“Like millions of Americans, I have been horrified at the images of migrants being shipped on buses and planes across the country to be used as political props,” Newsom wrote on Thursday. “Clearly, transporting families, including children, across state lines under false pretenses is morally reprehensible, but it may also be illegal.”

“I strongly urge the U.S. Department of Justice (US DOJ) to open an investigation into possible criminal or civil violations of federal law based on this alleged fraudulent scheme,” he added.

Speaking to reporters in Martha’s Vineyard near the shelter where migrants were being housed, immigration attorney Rachel Self also accused DeSantis of “kidnapping” the migrants by sending them to an island where millionaires vacation.

NEW: Immigration attorney Rachel Self is here at St. Anthony’s Church on Martha’s Vineyard and has been interviewing Venezuelan migrants about how they got here. She calls the entire ordeal “kidnapping.” #WBZ pic.twitter.com/Rs5NfI49WP

However, in a statement on Monday, the DeSantis administration said that the migrants were “left to fend for themselves” in Bexar County and that governor gave them an opportunity to live in a “sanctuary” jurisdiction.

“Florida gave them an opportunity to seek greener pastures in a sanctuary jurisdiction that offered greater resources for them, as we expected,” the admin said in a statement.

“Unless the MA national guard has abandoned these individuals, they have been provided accommodations, sustenance, clothing and more options to succeed following their unfair enticement into the United States, unlike the 53 immigrants who died in a truck found abandoned in Bexar County this June,” the statement added.

LeBron James: ‘Why’ Does Media Ask Me About Recent NBA Scandal, But Not About Photo Of NFL Owner From 1957?