Tim Tebow Has Raised $1 Million for Charities by Auctioning His Heisman: ‘Why Have it in Your Garage?’ 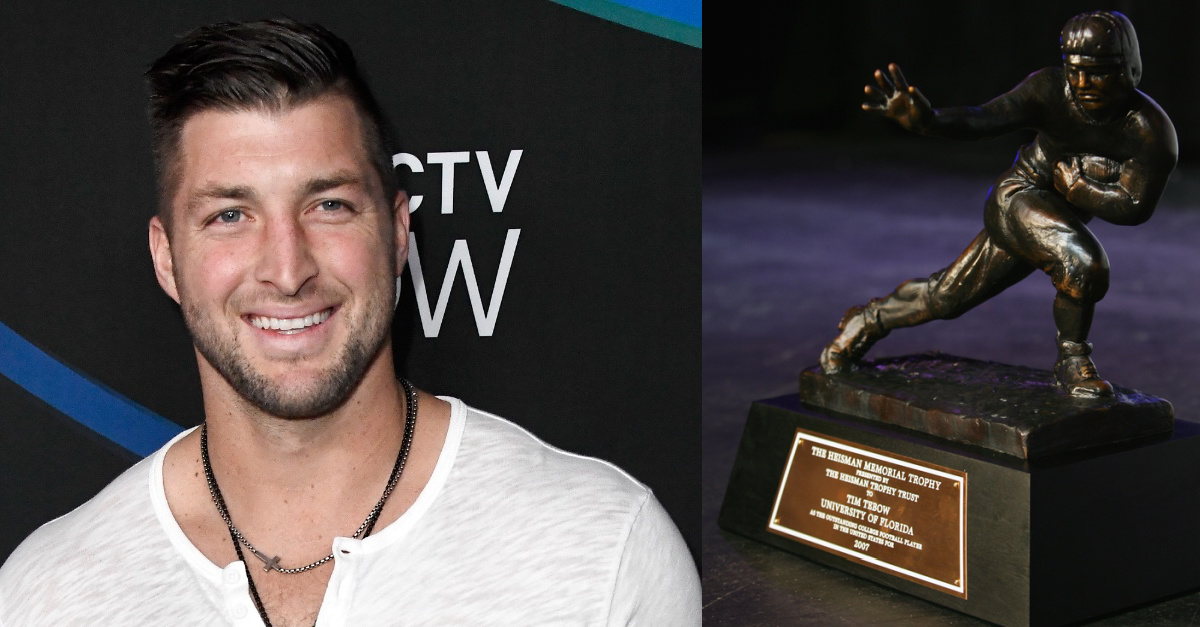 Trophies and awards typically sit on shelves and collect dust or are boxed away for no one to see.

But not in the world of Tim Tebow, who won the 2007 Heisman Trophy as college football’s most outstanding player.

“Every year or every six months, I’ve used it to auction off for a charity for people to keep in their homes,” Tebow told Dan Patrick of The Dan Patrick Show this week.

Tim Tebow doesn’t have his Heisman Trophy. He actually hasn’t had it for the last 8 years, as he’s been auctioning it off for charity. Most notably to country star @LukeBryan and @KathieLGifford.

All total, more than $1 million has been raised over the years. Country singer Luke Bryan was the most recent temporary owner. Kathie Lee Gifford was the first.

Tebow, an ESPN football analyst and former quarterback for the Florida Gators, said he wants his Heisman Trophy to be used for good.

“It is such a cool award that is so prestigious that very few people have ever had the chance to be around it,” he said, referencing the trophy’s ability to garner a high bid at auctions. “… I’m so grateful. … Why have it in your garage when it can be in someone else’s living room? And now a lot of kids are being helped with it. My goal is that it could be the most impactful Heisman one day not by sitting on a shelf… [but by] being on a lot of other shelves and making an impact on a lot of kids’ lives.”

Tebow won the award as a sophomore. Until then, only juniors and seniors had won it.

Asked how he developed a heart for philanthropy, Tebow – an outspoken Christian – pointed to his missionary parents.

“[The thing that] had a huge impact on my life [was] the way that we grew up – having the chance to be born and grow up the first five years of my life in the Philippines,” he said. “… [T]hese trophies and these championships and everything, they’re awesome, but ultimately, they’re not what’s most important – there’s so many things that are more important.

“… And I’m so grateful for that perspective because I’m someone that can totally lean toward win-at-all-costs, do whatever [you] can to drive to compete and win. My parents have just been such impactful, purpose-led heroes in my life.”

What Christians do that tick off non-Christians

How to Combine Holiday Traditions with Your Spouse