The Senate is moving toward ratifying an international treaty that instructs developed nations to rapidly phase out hydrofluorocarbons (HFCs) to curb emissions; if approved, the amendment will impose new standards that will raise the costs of air conditioning and refrigeration.

The Senate passed a motion Tuesday afternoon to end debates surrounding the Kigali Amendment to the 1987 Montreal Protocol, meaning that a final vote on the amendment will likely take place Thursday, according to The Washington Post. If the climate-focused amendment passes, it will limit the production and use of HFCs, man-made chemicals that are primarily used for cooling and refrigeration, by 85% over 15 years, which could substantially increase consumer and business costs in related industries. (RELATED: The Democrats’ Climate Bill Will Soon Let Corporations Pay Even Fewer Taxes)

“The environmental arguments are greatly overblown,” Ben Lieberman, a senior fellow at the Competitive Enterprise Institute, told the Daily Caller News Foundation. “There’s certainly no reason to move as quickly as the Kigali amendment requires especially when moving quickly will add tremendously to the costs.”

Household air conditioners, refrigerators as well as industrial cooling equipment will be much more expensive to repair as the supply of HFCs will be severely limited if the amendment is passed, Lieberman said.

“If you are tired of spending so much on repairs and decide to buy a new supposedly eco-friendly system … that will carry a price premium.” he continued.

Since the Kigali Amendment is an international climate treaty, it will require 67 votes, or two-thirds of the Senate, to become law. Some Republicans, including Sen. John Kennedy of Louisiana, claimed that it could create jobs by fostering the production of chemicals that can be used instead of HFCs, the Post reported.

Louisiana is home to a Honeywell plant that makes such chemicals, according to a Honeywell press release. Kennedy’s office did not immediately respond to the DCNF’s request for comment.

If countries agree to the new standards proposed by the treaty, the chemicals that threaten Earth’s ozone layer and contribute to climate change will be eventually eliminated, according to the UN. HFCs have a planet-warming effect that is hundreds to thousands of times more potent than carbon dioxide, according to the EPA.

“HFCs need to be dealt with as soon as possible because they are thousands — thousands — of times more damaging to our atmosphere than carbon dioxide,” Democratic Senate Majority Leader Chuck Schumer said on the Senate floor on Sept. 15.

Only four out of the 50 Republicans in the Senate have expressed concerns about the Kigali Amendment, reported the Post, citing two people familiar with the matter. Republican Sens. John Barrasso of Wyoming, James M. Inhofe of Oklahoma, Mike Lee of Utah and Rand Paul of Kentucky are opposed to the amendment in its current form, according to the Post. 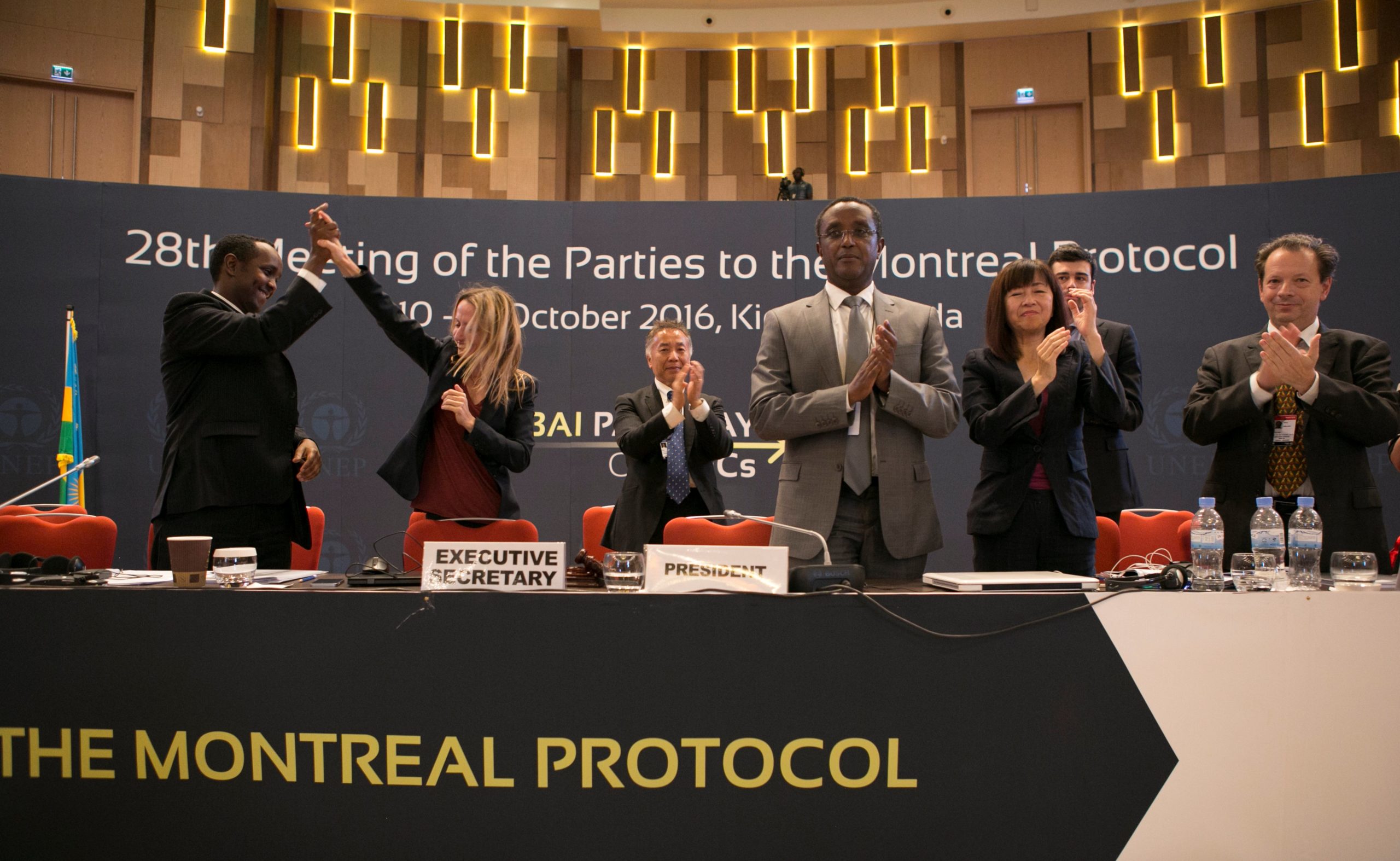 Members of the organizing committee celebrate the adoption of the Kigali Amendment on October 15, 2016 in Kigali. (Photo credit should read CYRIL NDEGEYA/AFP via Getty Images)

“Instead of outsourcing America’s environmental policy to the United Nations, let’s focus on implementing what Congress already passed,” Barrasso said in a statement provided to the DCNF. The aforementioned Republicans did not immediately respond to requests for comment.

“The Kigali amendment is a solution in search of a problem,” Barrasso said. “There is no need to handcuff America to another international treaty that lets China play by a different set of rules.”

The Biden administration submitted the treaty for ratification in 2021 and the Senate Foreign Relations Committee approved it in May 2022 with both Democratic and Republican support. Nearly 200 governments, including the Obama administration, originally agreed in 2016 to phase out HFCs.

Biden fires back at Holocaust denialism