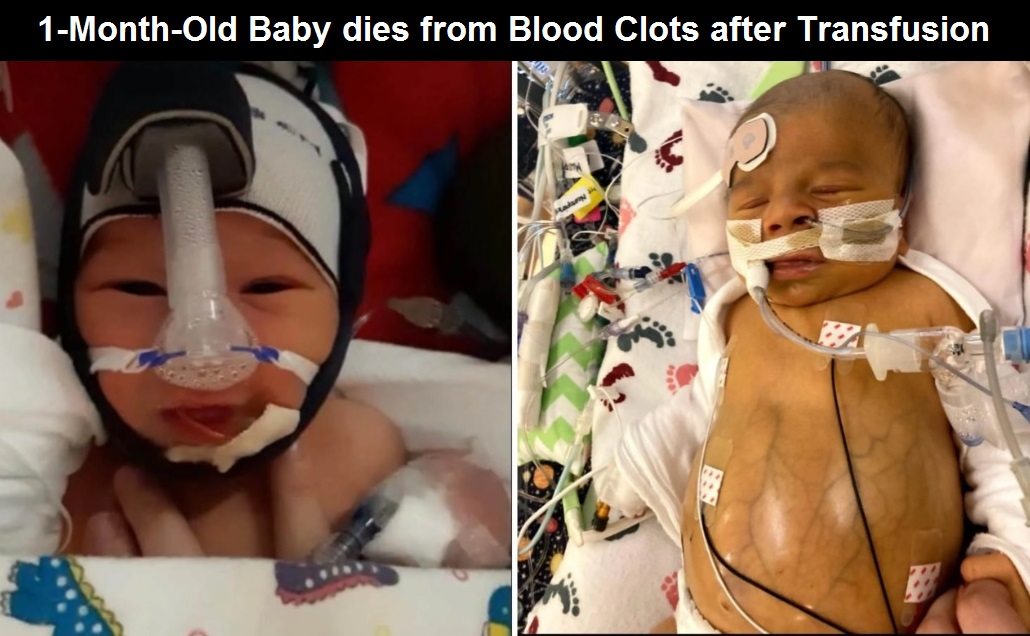 Baby Alexander before and after the blood transfusion (Source: Cornelia Hertzler via Gatway Pundit)

Earlier this month (September 2022), the Red Cross admitted that they don’t label blood products as originating from COVID-19 vaccinated people or blood from unvaccinated people.

The reason they don’t separate or apparently distinguish blood from COVID-19 vaccinated or unvaccinated people is because they believe that “the COVID-19 vaccine does not enter the bloodstream & poses no safety risks to the recipient.”

As Kyle Becker of Becker News recently pointed out, this statement by the Red Cross that the COVID-19 vaccine does not affect the bloodstream is contradicted by several published studies.

The social media response appears to dismiss legitimate concerns about the Covid vaccines, while slightly overstating the claim that the vaccine “does not enter into the bloodstream.”

A landmark peer-reviewed study published in September provides hard data on the serious adverse events of special interest [AESIs] of Pfizer-BioNTech and Moderna mRNA vaccines as determined in an independent “randomized clinical trial.”

“In the Pfizer trial, the excess risk of serious AESIs (10.1 per 10,000) was higher than the risk reduction for COVID-19 hospitalization relative to the placebo group (2.3 per 10,000 participants),” the study added.

The AESIs with Risk Ratios higher than one [elevated risk] include coagulation disorder, acute respiratory distress syndrome, and myocarditis/pericarditis.

In a May 2021 “Science” article, a medical researcher explained how the Covid vaccine ultimately does wind up in the bloodstream.

“The Spike protein is not released to wander freely through the bloodstream by itself, because it has a transmembrane anchor region that (as the name implies) leaves it stuck. That’s how it sits in the virus itself, and it does the same in human cells,” Derek Lowe points out.

“The Spike protein produced by vaccination is not released in a way that it gets to encounter the ACE2 proteins on the surface of other human cells at all: it’s sitting on the surface of muscle and lymphatic cells up in your shoulder, not wandering through your lungs causing trouble,” Lowe added. “Some of the vaccine dose is going to make it into the bloodstream, of course. But keep in mind, when the mRNA or adenovirus particles do hit cells outside of the liver or the site of injection, they’re still causing them to express Spike protein anchored on their surfaces, not dumping it into the circulation.”

Thus, it appears that the Red Cross’s social media response is a bit of an overstatement on the vaccine not entering the bloodstream. It does not exactly engender trust to dismiss the public’s concerns and to post information that appears to be misleading.

There are millions of people who might need to receive a blood transfusion and have documented grounds not to fully trust the mRNA vaccines. It might behoove the American Red Cross to show that they care about those people, too. (Source.)

The Gateway Pundit recently published the story of Cornelia Hertzler of Hot Springs, Montana, who gave birth to a baby boy on January 3, 2022 who died just a month later on February 17, 2022 from blood clots just after receiving a blood transfusion.

Mrs. Hertzler told The Gateway Pundit that her one-month-old baby died from a blood clot caused by receiving “COVID-vaccinated blood” during a blood transfusion.

“He died after getting a blood transfusion of vaccinated blood,” Hertzler claimed. “He got a blood clot instantly after receiving his transfusion. A blood clot that no blood thinner could resolve.”

“It got steadily worse until it went from his knee to his heart and his organs shut down. That’s why his body swelled up and his veins looked like they were exploding,” she added.

Alexander was born with a throat problem that can only be treated with surgery. Hertzler claimed that her son was given the blood by the doctor at Sacred Heart in Spokane, Washington, without her or her husband’s permission.

“He had an operation to fix an issue in his throat he was born with. He did not need a blood transfusion during the operation. Most babies do not.”

“Later on, after our authorization had expired (we only authorized a blood transfusion in case of an emergency during an operation). The doctor gave him a blood transfusion because his hemoglobin levels were a little low. We had not given permission for this and the doctor knew we did not want vaccinated blood because we were worried about blood clots. The next day after the transfusion, they discovered a blood clot,” Hertzler said.

Hertzler stated the doctor had ruled out the possibility that the incident was caused by the blood transfusion.

There is no indication that Mrs. Hertzler was able to receive any information about the vaccination status of the person who donated their blood that was used in her baby, and she perhaps was just drawing conclusions based on the fact that about 80% of the U.S. population has now received at least one dose of a COVID-19 vaccine, and that COVID-19 vaccinated people who have now died commonly have strange blood clots, according to reports from funeral home embalmers. See:

Either way, we are surely going to see more tragic stories like this one until someone steps forward to provide blood that is clearly marked as coming from either COVID-19 vaccinated people, or unvaccinated people.

And if the Red Cross is not going to do this, then it sounds like there is a potential lucrative business opportunity for others to step in and fulfill.