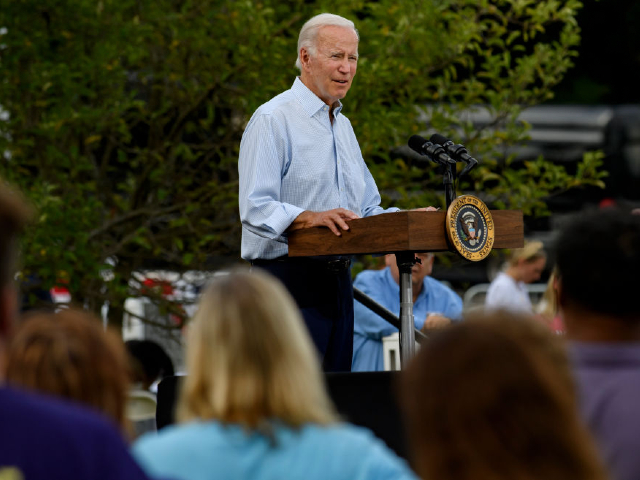 President Biden drew an abnormally small crowd of supporters for his Labor Day speech in West Mifflin, Pennsylvania on Monday, reminiscent of the bizarrely tiny groups of supporters he drew to his campaign events during the 2020 presidential election.

Biden spoke at the United Steelworkers event on Labor Day, but it drew very few union members, photos show. The Daily Mail went as far as describing the crowd as “pitifully small” with “dozens” gathered to hear the President of the United States speak. Photos appear to back that assessment up, and according to TribLive, “about 100 attendees took COVID tests” prior to the event:

Biden is back stage with US Senate candidate John Fetterman ahead of remarks in West Mifflin, a town southeast of Pittsburgh, his 2nd stop on this Labor Day and his 3rd Pennsylvania trip in a week. pic.twitter.com/jQPBy21IkD

The small crowd generated a good dose of mocking across social media.

“Such a big crowd! Of course these libs won’t really say how many people were there,” one user remarked.

“There are more people that come to my PTA meetings when I (the President) speak! Embarrassing,” another said.

Biden reportedly echoed the sentiments from his dark and angry anti-MAGA speech during his remarks, contending that “democracy is really at stake” in the face of MAGA Republicans.

“We have to be stronger and more determined and more committed to saving American democracy than the MAGA Republicans and that guy out that door, are destroying democracy,” he said.

The crowd size in West Mifflin is reminiscent of the extremely small crowds Biden drew as he ran for president in 2020, although he dismissed the criticisms at the time, claiming that he did not want them to “become superspreaders” in the wake of the Chinese coronavirus.