POLITICO Playbook Gives Us What Nobody Asked for This Thanksgiving 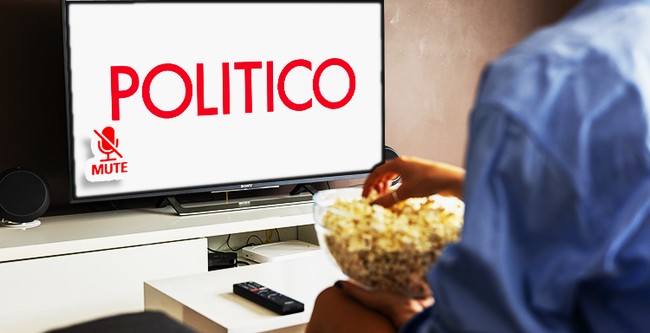 By now you likely had your Thanksgiving dinner. You may be getting ready for dessert, if you haven’t had that already. Have you managed to avoid talking politics at the dinner table? Many would like that, even with the country having just experienced a rather bizarre midterm election earlier this month. That’s not the way of POLITICO, though. Thursday saw an edition of Playbook which focused on House Majority Leader Steny Hoyer (D-MD), but not before they published one earlier that morning, on “How to sound smart about politics on Thanksgiving.”

“Unfortunately, there are some media outlets out there who don’t think it’s Thanksgiving unless we steer every single conversation back to politics. And that’s where Politico’s Playbook comes in,” our friends at Twitchy aptly pointed out earlier. “Why — whyyyyyyyyyy — do they do this every single year? Don’t they know that literally no one, at least no sane person, has ever asked for this?“

As you prepare your holiday plans, you’ll probably want to be armed at the dinner table with something smart to say about the midterms – like how the anti-Trump coalition that elected Biden in 2020 seemed to hold together for the Dems. More in Playbook: https://t.co/OadDcchcLJ

What attention the tweet got was pretty much solely calling the outlet out for not being able to let the holiday just be about the holiday of spending time with friends and loved ones and being thankful. For many that may mean being thankful for taking a break from politics.

IWF Visting Fellow Angela Morabito also took a screenshot of an email she got advertising that morning edition, to mock it.

Every article like this is “parrot our left wing talking points until your uncle flips a table” pic.twitter.com/xeygU00ba2

This Thursday morning holiday edition, which is about as long as the rest–meaning it is long–is not only unnecessary, it’s cringeworthy and tone-deaf.

“As you prepare your own holiday plans, you’ll probably want to be armed at the dinner table with something smart to say about the meaning of the midterms,” it presumes. No, you probably don’t.

The Playbook has a paragraph on how “It is admittedly a confusing subject,” and then goes on to suggest “But if you want to filter out a lot of the noise in the results and focus in on the signal, this morning’s Ron Brownstein piece at CNN is a good one to clip and save for Thursday.”

Who is clipping and saving articles anymore, let alone on Thanksgiving? Would you take that person seriously? It’s not likely.

To make it worse, Brownstein is already talking about 2024. Here’s how the piece is explained:

He identifies a few key trends present in the 2022 results that tell us a lot about 2024:

The two presidential nominees could start out in 2024 with as many as 46 states and D.C. sorted between the two parties. Brownstein argues that given recent trends, Democrats could start with a safe 260 electoral votes and Republicans with a safe 235 electoral votes. Under this scenario, longtime battleground states have become reliably red or blue. With Michigan and Pennsylvania seemingly back in Democratic hands, Florida and Ohio dominated by the GOP, sometimes-blue North Carolina out of reach for Democrats, and perennial GOP target New Hampshire out of reach for Republicans, the list of true toss-ups could be down to just four states worth 43 electoral votes: Nevada, Arizona, Georgia and Wisconsin.

The electoral college map is so closely divided that you can narrow down the decisive swing votes to a few pockets spread across those four states: “a miniscule number of people living in the tiny patches of contested political ground — white-collar suburbs of Atlanta and Phoenix, working-class Latino neighborhoods in and around Las Vegas and the mid-sized communities of the so-called BOW counties in Wisconsin.”

“Of course, if this is all too boring, just ask your uncle what he thinks about ELON MUSK reinstating @realDonaldTrump. That should get the conversation going,” the Playbook goes on to suggest.

Come on, I thought POLITICO wanted us to “sound smart” on Thanksgiving. If they really did, they would be letting their readers know that former and potentially future President Donald Trump hasn’t even tweeted since January 8, 2021. He not only prefers it over at Truth Social, there’s legalese which complicates his ability to tweet, as Spencer explained earlier this week, not long after Trump’s account and the former tweets were reinstated last Saturday.

Those who take POLITICO’s suggestions likely don’t sound “smart,” but rather obsessed and potentially even a nuisance who may get themselves disinvited from future holidays or even thrown out.

I shudder to think of there being an edition for Christmas.