Out of the Attic: Hope and remembrance in Alexandria 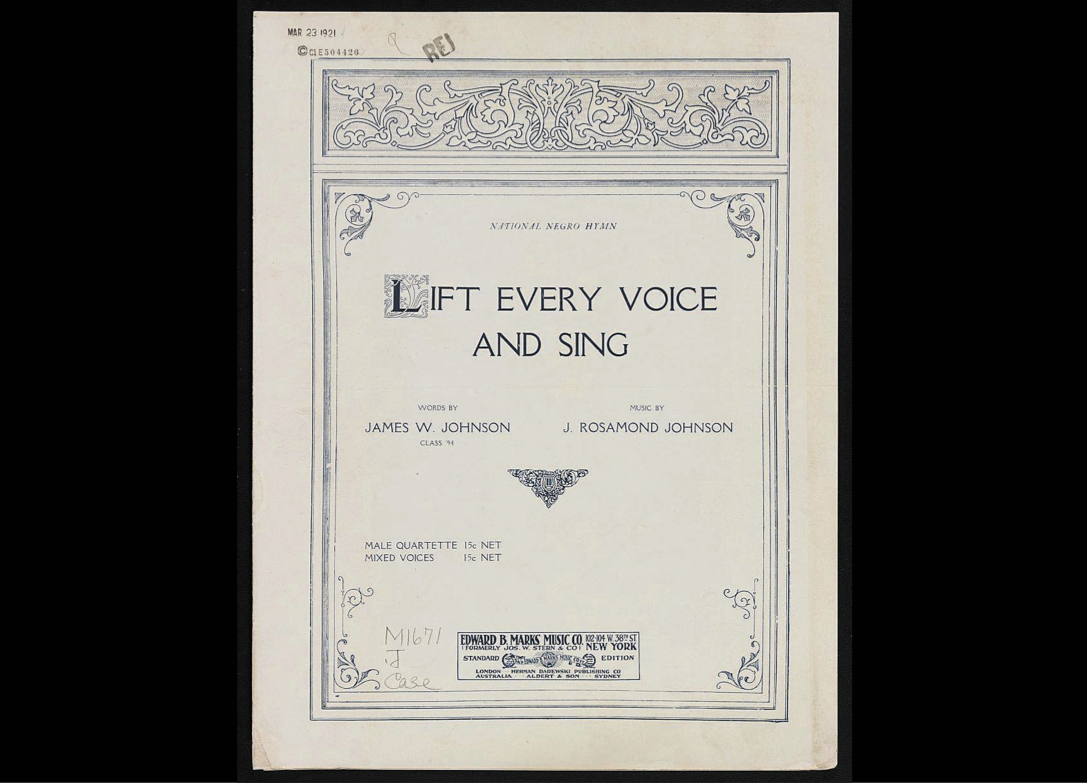 The poem and hymn known as the Black National Anthem, “Lift Every Voice and Sing,” originated in 1900, when a group of young men in Jacksonville, Florida were organizing a celebration for President Abraham Lincoln’s birthday.

James Weldon Johnson, educator, author, diplomat and activist, and his brother, J. Rosamond Johnson, composer, singer, actor and music supervisor, collaborated to write it. While pacing the front porch at their family home, James wrote the lyrics, handing each stanza to his brother, who set the poetry to music at the piano.

The brothers sent the manuscript to their New York publisher, Edward B. Marks, who mimeographed copies to be used by the chorus at the segregated Stanton School, where James was principal. Five hundred students sang it on Feb. 12, 1900, at Lincoln’s birthday festivities. Several months later, their publisher printed the song as “The National Negro Hymn.”

After the school burned down in the spring of 1901, the Johnsons moved to New York to pursue a career in show business. Along with Bob Cole, a Black composer who is considered to be one of the greatest in Black entertainment, they published more than 200 hundred songs.

While James and J. Rosamond were busy with their various careers, they forgot about the song they had created in Jacksonville. The school children, however, kept singing and sharing it until it had spread all over the South and to other parts of the United States. In 1919, the National Association for the Advancement of Colored People, which James had helped found, adopted “Lift Every Voice and Sing” as its official song.

James Clyburn, a longtime congressional representative from South Carolina, introduced a bill in 2001 to make it the national hymn as “an act of bringing the country together.”

“Lift Every Voice and Sing” will be spoken at 4 p.m. Saturday at Market Square at the Soil Collection Ceremony that will be held for Alexandria’s two lynching victims, Joseph Mc- Coy and Benjamin Thomas. In a spirit of reconciliation, faith leaders from historically Black and white churches in Alexandria will join together in reading the Black National Anthem during the remembrance Soil Collection Ceremony.

Out of the Attic is provided by The Office of Historic Alexandria.