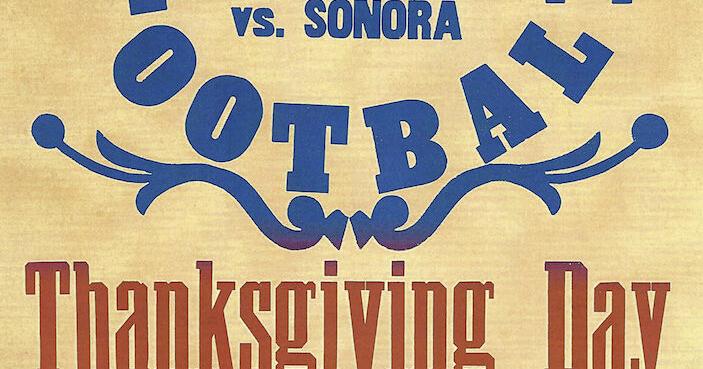 Watching a game of football while enjoying or preparing Thanksgiving dinner is an American tradition that dates back to the 19th century.

The first Thanksgiving Day football game was played in Philadelphia in 1869 between the Young America Cricket Club and Germantown Cricket Club. It was two weeks after Rutgers University defeated Princeton University in what many consider to be the first gridiron game, and six years after President Abraham Lincoln fixed the national holiday’s date for the final Thursday of November.

Football became more synonymous with Thanksgiving as many high school teams started playing on the holiday.

Tuolumne County was the site of a legendary Turkey Day matchup in 1904 between Sonora and the freshman squad from the University of California, Berkeley, at a time when many towns had their own teams made up of young men in the area.

The Union Democrat reported at the time that at least 800 people witnessed the event, with 600 paying for tickets at the gate and another several hundred watching from the surrounding hills. The local players had the weight and strength, but not the training, leading to a 16-0 loss.

Adding to the celebration after the game, a man named Miller reportedly made a balloon ascension and parachute jump. This was followed by a ball at Turn Verein Hall, now the site of Courthouse Square in downtown Sonora.

Another football game was held on Thanksgiving the following year between Sonora and Berkeley’s second stringers, but bad weather kept the crowds down. Sonora once again lost, 17-0, following three months of continuous training by the Cal team.

The second game was also followed by the arrest of one of Sonora’s team members for misappropriating the team’s funds to buy Christmas presents for his sweetheart.

The bird flu outbreak is the deadliest in U.S. history. Here’s what we know : NPR

Why do the British know so little about Irish history?

The End of the Study of History