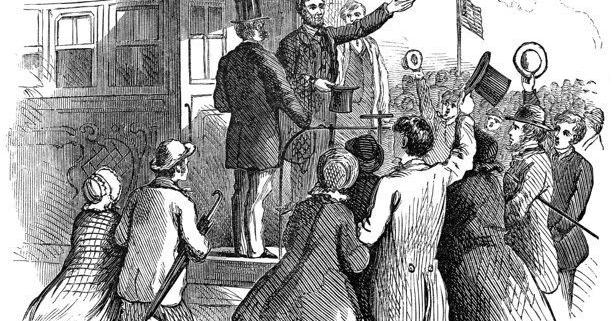 GREENSBURG — President Abraham Lincoln is scheduled to speak from the rear car of an Ohio Rail Experience Train at 12:30 p.m. September 17 at the intersection of Railroad and Broadway streets in Greensburg.

The celebrated Indiana Wind Symphony will play and crowds will cheer on the newly elected 16th United States President as he travels to his inauguration in Washington, D.C.

An elaborate re-enactment of the day Abe Lincoln actually spoke in Greensburg is the next event being presented in conjunction with Greensburg’s bicentennial celebration, and a fascinating step back to a time when things were different in many ways.

In 1861, the fastest mode of travel was by train, but the size of the tracks had yet not been standardized. The first law governing railroad track standardization was not passed until 1861, so Lincoln and his entourage were required to change trains several times.

Their mode of travel was lush even by modern standards.

According to Brian Wolly in his 2011 Smithsonian.com article “Lincoln’s Whistle-Stop Trip to Washington,” the train engines were “a modern marvel of gleam and steam, hissing in readiness with a smoke-retarding funnel stack towering over the huge crowd of well-wishers.”

Along the many stops necessary for the journey, cities and railroad lines began informal contests to give the president and his party the most extravagant and patriotically decorated reception at each stop. There were fireworks displays and formal receptions at each stop to meet and rub elbows with the newly elected president from Illinois.

Mayors’ and dignitaries’ wives along the way jockeyed for the bragging rights of having presented the president the most delicious and spectacularly prepared meal, served “by delivery,” of course.

But the journey, along with its pomp and regalia, was also fraught with deceit and intrigue.

In 1860, Lincoln, a Republican and the first to be elected from that party, became the 16th President of the United States. The nation was at unrest, and it appeared the Confederate states departure from the Union was inevitable.

A plot to assassinate the new president in Baltimore, Maryland was rumored, and the route to Washington had to be secretly changed to pass through Pittsburgh into Maryland en route to the final Washington, D.C. destination.

The train arrived on time without incident, but for the remainder of Lincoln’s presidency many critics would hound him for the seemingly cowardly act of sneaking through Baltimore at night, in disguise, sacrificing his honor for his personal safety.

The local visit on the 17th is a partnership between Fall Festival and the bicentennial celebration organizers, according to Bicentennial Corrdinator John Pratt.

Before the event, “Abe,” played by Cincinnatti actor Stanley Wernz, will join the train at New Point before it stops in Greensburg at Railroad and Broadway streets.

“He spoke here briefly on February 12, 1861 on his way to the White House,” Pratt said. “Also on that day, the Greensburg Brass Band played, which is why the Indiana Wind Symphony will be performing.”

According to the Indiana Wind Symphony website (www.indianawindsymphony.org), two works by Jerry Williams will be performed as well as a march written by C. Earl Downey, the bandmaster for the Municipal Band of Arlington.