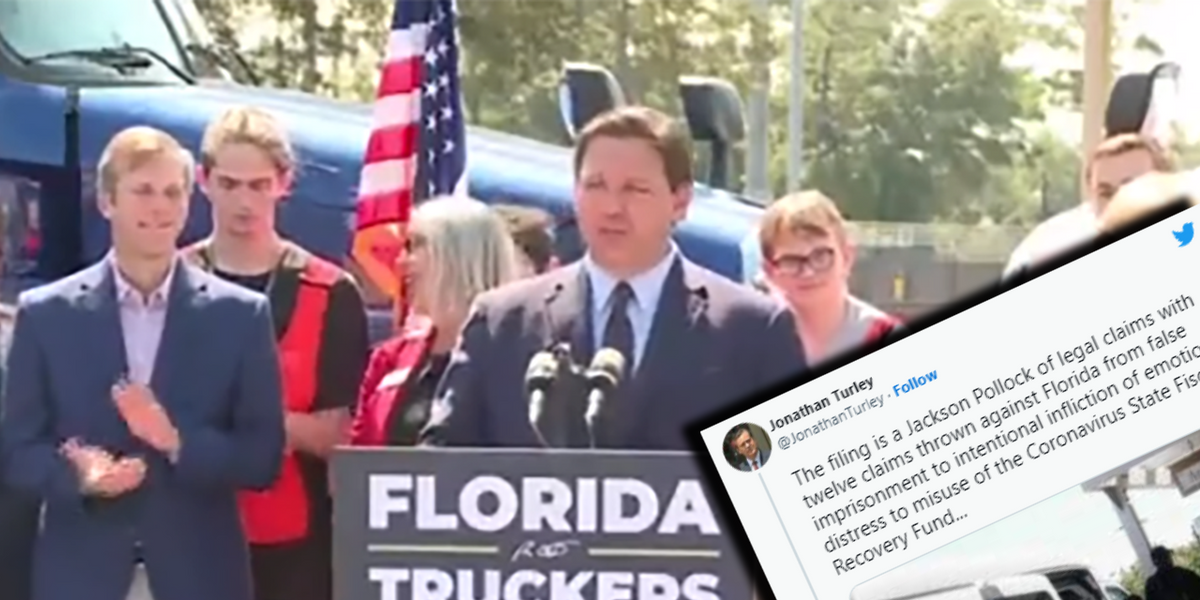 There are few people in academia and law who I would ever turn to for answers to questions. There are even fewer who I would seek out for answers or opinions on serious and or complicated matters. Luckily, one of them has his own website where he provides his expert commentary.

Jonathan Turley–who you might remember from such classics as the 2019 Trump impeachment trial (he also sounded off after the recent raid on Mar-a-Lago)–took to his website today after news broke that three of the 50 illegal immigrants flown to Martha’s Vineyard by America’s Governor Ron DeSantis were filing a lawsuit, alleging various acts of misconduct on the side of DeSantis and his team. Included in the list of offenses are that the migrants were tricked, defrauded, lied to, and false imprisonment.

Turley writes that “most of these claims are highly dubious and will require substantially more factual support to survive a threshold challenge.”

For several reasons pointed out by Turley, this case is laughable.

The lawyers are citing a brochure to support the claim of fraud. The brochure reads “Massachusetts Refugee Benefits” with instructions for how to change an address with U.S. Citizenship and Immigration Services (USCIS), including USCIS Form AR-11, “Alien’s Change of Address Card.” […]
The state says that the brochure takes material from the state website for refugees and migrants.

They also claim that the immigrants were lied to, told they were flying to Boston or DC, but as Turley points out, “the waiver refers only to the destination being ‘the State of Massachusetts.'”

One of the most egregious claims being made among the allegations is that of false imprisonment. But that, too, falls apart.

The only confinement alleged is the flight itself, which necessarily does not allow people to leave mid flight. Thousands of migrants have been transferred by flights to locations around the country, including trips arranged by the Biden Administration and a Democratic mayor.

In his final thoughts on the matter, Turley states that “the complaint is stronger on rhetoric than supporting facts or law,” and while it is certain to be responded to with a motion to dismiss–which, if the judge isn’t a political hack, should be granted (that’s my opinion, not Turley’s). But even if the case is allowed to move forward, it will spend who knows how long in litigation, and in the meantime, DeSantis will be able to send as many happy-to-volunteer illegal immigrants to all sorts of fun sanctuary jurisdictions.