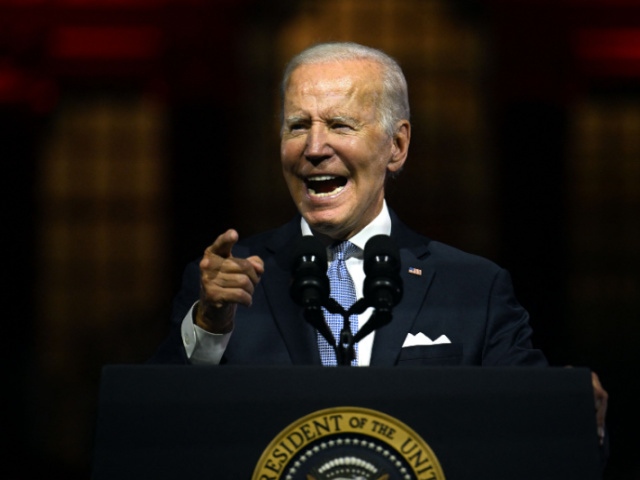 President Joe Biden condemned supporters of former President Donald Trump on Thursday night in a speech that was promoted as a mission to restore “the soul of the nation.”

But the president focused intently on raising fears of his political opponents, using the word violence five different times to paint the Republican Party as dangerous and “extremist.”

“They promote authoritarian leaders and they fan the flames of political violence that are a threat to our personal rights, to the pursuit of justice, to the rule of law, to the very soul of this country,” Biden said during his sharply political speech at Independence Hall in Pennsylvania.

The president repeatedly claimed he rejected political violence, despite repeatedly calling for his fellow Americans to rise up against supporters of Trump.

“This is a nation that rejects violence, as a political tool. We do not encourage violence,” he said.

He said violence was a tool of the MAGA Republicans, focusing intently on the “insurrection” on January 6, as an angry mob stormed Capitol Hill to protest the 2020 election.

“We cannot allow violence to be normalized in this country,” Biden said. “It is wrong. We have to reject political violence with all the law and clarity and conviction this nation can muster.”

Biden argued that the majority of Republicans were not “extreme” but insisted that Trump continued to drive their political fever.

“[T]here is no question that the Republican party today is dominated, driven, and intimidated by Donald Trump and the MAGA Republicans, and that is a threat to this country,” he said.

Biden said that Democrats could see the “light” in the darkness which he described as “COVID, gun violence, [and] insurrection.”

At another point in his speech, Biden argued that people who were critics of his economic agenda were “white supremacists” and “extremists.”

The president tried to define MAGA Republicans as those who believed Americans had “no right to choose, no right to privacy, no right to contraception, no right to marry who you love” and did not mention inflation, gas prices, or border security.

“MAGA Republicans have made their choice,” he warned. “They embrace anger. They thrive on chaos. They live not in the light of truth but in the shadow of lies.”

Joe Biden Is ‘Cognitively Impaired,’ May Lead Us to WWIII

Diesel Powered Trucks Are Now Racist, According to California