‘No Enemies To The Right’

Is Kamala Harris Faking Another Story From Her Early Childhood?


Vice President Kamala Harris is at it again — appearing to fake another story from her childhood about eating grapes.

Harris said in a Friday interview with The Nation she never ate table grapes until she was in her 20’s, in solidarity with the United Farm Workers union. But her timeline doesn’t add up, according to the New York Post.

Harris said her mother was “very deeply rooted” in social, economic and racial justice causes and that she was inspired by the United Farm Workers, who boycotted grapes in order to force negotiations, according to The Nation.

“The farmworkers movement was very much a part of my childhood,” Harris reportedly said. “This sounds quaint, and so I’m reluctant to say it, but, you know, I didn’t eat a grape until I was in my 20s. Like, literally, had never had a grape. I remember the first time I had a grape, I went, ‘Wow! This is quite tasty.’ It was absolutely ingrained so deeply in me: Never cross a picket line.”

Eating table grapes was a form of defiance for labor activists when Harris was between the ages of 19-36, according to The Post. (RELATED: Kamala’s Brittney Griner Comments Spark Mega Social Media Backlash)

The United Farm Workers began boycotting grapes for the third time in June 1984, with the strike lasting until 2000, The Post reported. The union had boycotted grapes in two previous instances, one of which ended when Harris was five years old, and another that lasted between 1973-1978, according to the report. 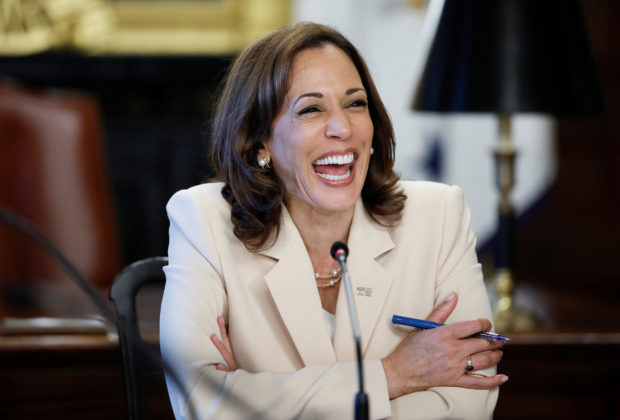 U.S. Vice President Kamala Harris meets with leaders from U.S. colleges and universities to discuss challenges students are facing after the Supreme Court decision to end the nationwide constitutional right to abortion, in her ceremonial office at the Eisenhower Executive Office Building in Washington, U.S., August 8, 2022. REUTERS/Evelyn Hockstein

Harris also appeared to fake another story about her childhood shortly before assuming office. During an October 2020 interview with Elle Magazine, Harris recounted a story nearly identical to one Martin Luther King Jr., told in 1965.

Harris said she was attending a civil rights march in Oakland, California as a child and fell out of her stroller, unbeknownst to the adults caught up in the protest.

“By the time they noticed little Kamala was gone and doubled back, she was understandably upset,” according to the article. “‘My mother tells the story about how I’m fussing,’ Harris says, ‘and she’s like, ‘Baby, what do you want? What do you need?’ And I just looked at her and I said, ‘Fweedom.’”

Harris has repeated the story on two other occasions. The story is nearly identical to one Martin Luther King Jr. recounted in which there was “a moment” where a young black girl was “accosted” by a white policeman during a demonstration. The civil rights activist said the young girl looked the policeman in the eye and said she wanted “fee-dom,” according to Dr. King’s story.

“I never will forget a moment in Birmingham when a white policeman accosted a little Negro girl, seven or eight years old, who was walking in a demonstration with her mother,” King recalled in an interview with writer Alex Haley published by Playboy more than 50 years ago. “‘What do you want?’ the policeman asked her gruffly, and the little girl looked him straight in the eye and answered, ‘Fee-dom.’ She couldn’t even pronounce it, but she knew.”

Tuesday Live Broadcast: The People Are Rising Up As The Mass Illusion Unravels

‘The View’ Promises To Talk About Daily Caller Disruption In White House Briefing, But Gushes Over Fauci Instead