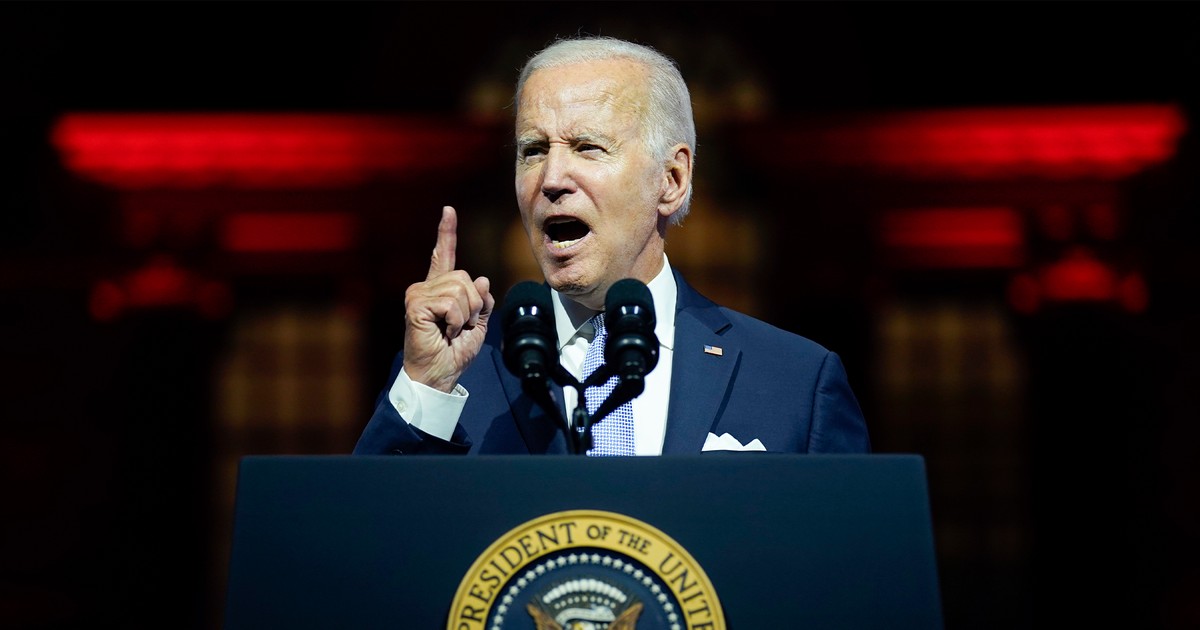 “We have met the enemy and he is us,” said Joe Biden in so many words on Thursday night. Cartoonist Walt Kelly modified Commodore Oliver Perry’s quote — “We have met the enemy and they are ours.” — in honor of the first Earth Day. But Biden and the Democrats can’t win in November unless they turn “us” into “them.” They have to create an enemy and divide Americans into “us” (the good guys) and “them” (the bad guys).


Anyone who saw Biden’s speech, who listened to its hysterical exaggerations and bitter denunciations of former president Donald Trump and his party, had to have been unnerved by it. It was a macabre nightmare, or as Matt Taibbi put it, Biden’s handlers, by “Trying to create a setting for judgment and warning, they overshot the staging and made the white-haired ex-Senator look like a vampire sat up from a crypt.”

This is why it matters when Biden describes “MAGA Republicans” as a “threat… to the very soul of this country,” or as “extremism that threatens the very foundations of our Republic,” representing “dangers around us we cannot allow to prevail.” It’s hard to see how these terms are substantively different from War on Terror constructions like the “continued and imminent threat to U.S. interests” or a “serious and continuing threat to the American people.” Biden sounded like a man preparing followers for an enforcement response to Trumpism itself, and even if that wasn’t what he was doing, it’s clear many Trump supporters heard things that way.

Taibbi points out that it was no accident that Biden used the loaded phrase “clear and present danger” in describing Trump and his followers.

Biden went out of his way to quote federal judge Michael Luttig in calling the MAGA enemy a “clear and present danger.” The loaded term traces to a 1919 Supreme Court case in which Oliver Wendell Holmes created a test for judging if speech and/or other political activities may be suppressed. “The question,” Holmes wrote, “is whether the words… create a clear and present danger that they will bring about the substantive evils that Congress has a right to prevent.” This “balancing test” was invoked to justify restrictions ranging from a ban on passing out antiwar leaflets to bars of membership in communist organizations. The “substantive evil” in such cases often involved a judgment that groups or individuals posed an active threat to overthrow the state — not so different from arguing that a political movement threatens “democracy itself.”


“In the context of what increasingly feels like a fifties-style PR campaign to describe ‘MAGA Republicans’ as dangerous subversives, ‘clear and present danger’ sounded particularly ominous,” wrote Taibbi.

Other Democrats and their media water carriers picked up the theme.

Atlantic contributor Peter Wehner went on Morning Joe and previewed a line that would appear in Biden’s speech, saying Republicans are a “dagger pointed at the throat of American democracy,” while New York Times writer Charles Blow said “the Republican Party itself is now a threat to our democracy.” The concept of MAGA Republicans as not merely disreputable, deplorable racists but an imminent terror threat is suddenly mainstream:

Karine Jean-Pierre says Biden has been “really clear” that the “extreme MAGA-agenda” is “a threat to the rule of law.” pic.twitter.com/QjUiUXl297

Does that sound like rhetorical flourishes, or are they deadly serious about fighting this “threat to the rule of law,” the “threat to our democracy,” and the “dagger pointed at the throat of American democracy”?

The president and all those good little Democrats will tell us, “Well, we don’t really mean all Republicans. Just the bad ones who support Trump and believe in making America great again.” But 74 million people voted for Donald Trump in 2020. It’s pathetically stupid to believe that all of these people are a threat.


But Biden needs an enemy. And if the Democrats are able to generate enough hysteria, enough fear about “MAGA extremists,” they may yet hang on to Congress.

If that happens, the next two years will be a nightmare that most on the right would prefer not to experience.

Pantone’s 2023 Color of the Year Is Viva Magenta