“INS Vikrant is a floating airfield, a floating town, and the power generated in it can light up 5,000 houses, while the cables can run from Kashi to Kochi,” Modi boasted at the ceremony.

Modi was referring to the 88-megawatt power generation capacity of Vikrant’s four gas turbine engines, and the combined 2,500-kilometer length of its electrical cabling – a point of pride the Indian government and supportive media seem curiously focused on.

The aircraft carrier’s power cables would indeed stretch between the cities of Kashi and Kochi if they were torn out and laid end-to-end on the ground, although doing that would probably make the ship’s engineers very grumpy.

“INS Vikrant will also use the power of our Nari Shakti,” Modi continued. “The way there is no limitation to the sea, there will be no restrictions for our women.”

Nari Shakti is a Sanskrit phrase that means “woman power.” The new aircraft carrier has a crew of about 1,600, and includes specialized cabins for female officers and sailors.

Modi said the commissioning of the new ship means “India has joined the list of countries which manufacture huge aircraft carriers with indigenous technology.” The other countries that have constructed and deployed their own aircraft carriers are the United States, Russia, France, the United Kingdom, and China.

“It’s a historic day and landmark achievement. It’s an example of the government’s thrust to make India’s defense sector self-reliant … It has filled the country with a new confidence,” Modi said. 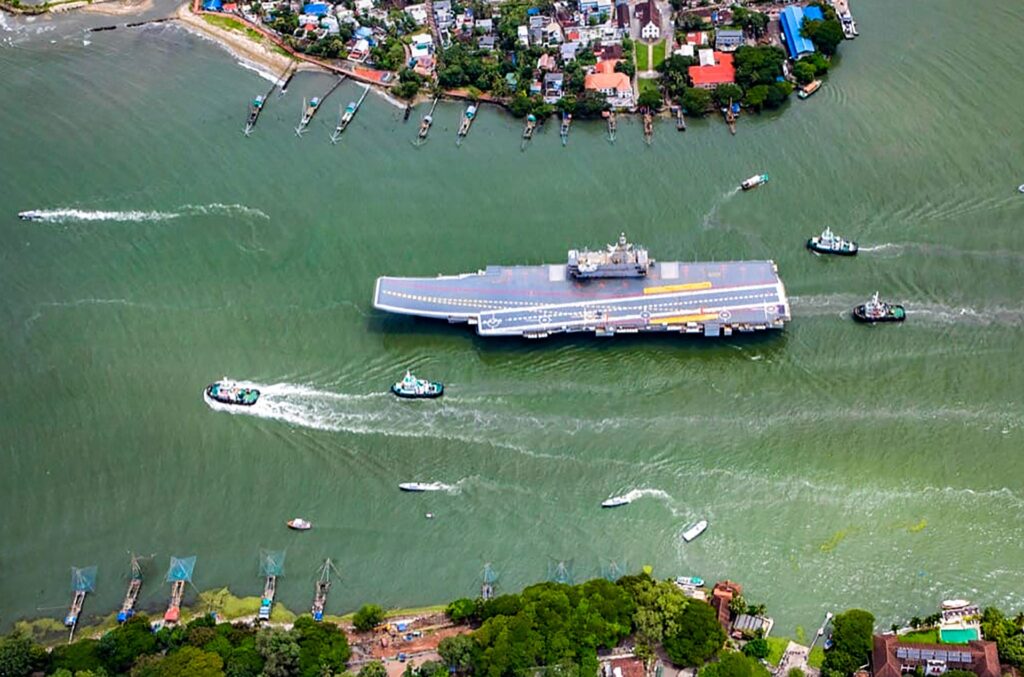 The Vikrant, whose name means “courageous,” is considerably smaller than American and British carriers, with a 30-plane air wing that is half the size of the 60 planes carried by the USS Nimitz class. 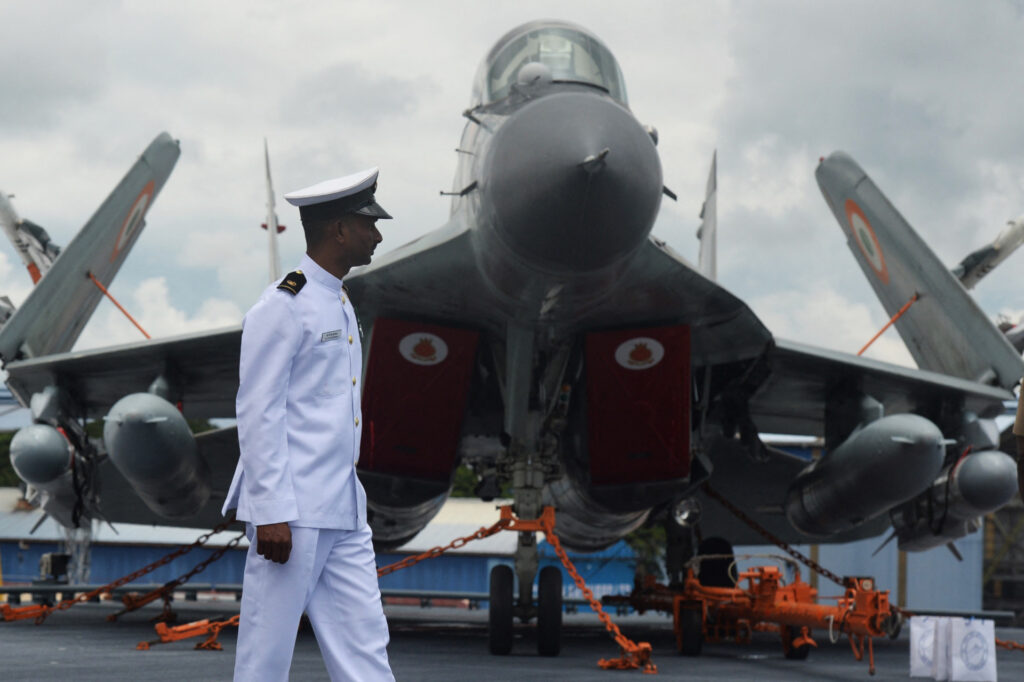 An Indian Navy officer walks past a Mig 29 fighter jet on the deck of the Indian indigenous aircraft carrier INS Vikrant during its commissioning at Cochin Shipyard in Kochi on September 2, 2022. (ARUN SANKAR/AFP via Getty Images)

The Indian ship uses the “ski slope” method of launching its planes into the air via a runway that slants upward from the bow, rather than the more advanced steam or electromagnetic catapults on the newest carriers. 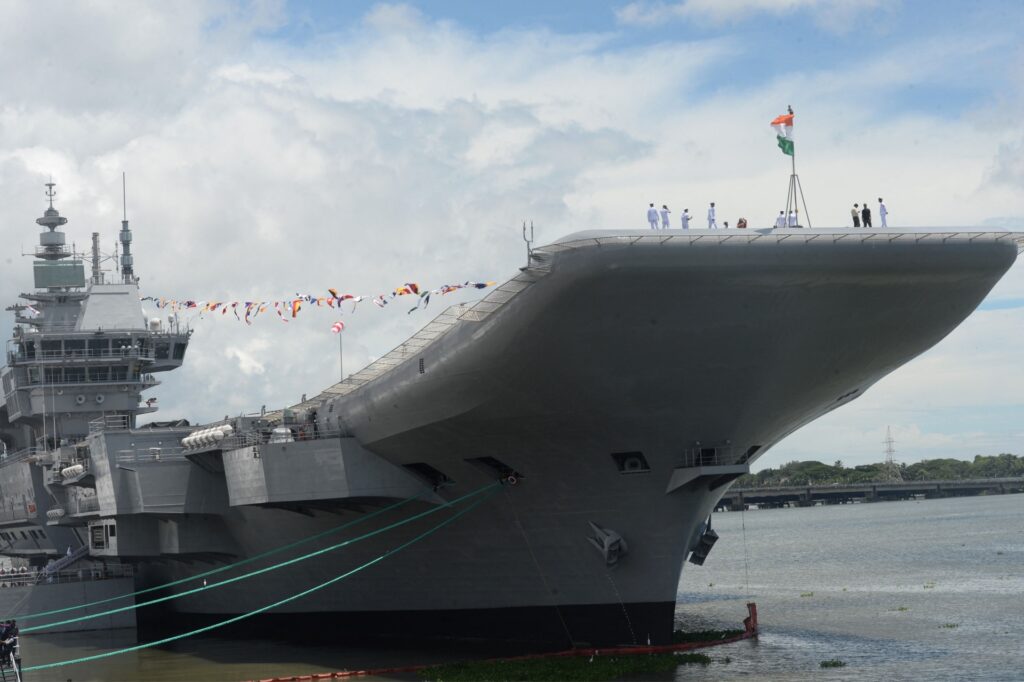 Indian Navy officers gather on the deck of the Indian indigenous aircraft carrier INS Vikrant during its commissioning at Cochin Shipyard in Kochi on September 2, 2022. (ARUN SANKAR/AFP via Getty Images)

The Vikrant currently carries Russian-built MiG-29K fighters, although it also has some U.S. MH-60R helicopters aboard. India has expressed interest in replacing the underperforming Russian planes with either American F/A-18 Super Hornet or French Rafale-M fighters.

#INSVikrant | INS Vikrant will strengthen the country’s standing as a ‘Blue Water Navy’ — a maritime force with global reach and capability to operate over deep seas. https://t.co/9bcSRksCok #ExpressExplained pic.twitter.com/rF3QMhMp6k

According to the Indian Navy, the ship is not entirely home-built; its construction actually involved about 76 percent indigenous content, with 80 to 85 percent of the cost returned to the Indian economy.

Construction of the ship was initiated in 2003, with the first ceremonial steel cutting performed in April 2005. The Vikrant was ceremonially launched in 2013 with about 80 percent of its construction complete.

Commissioning was originally intended to take place in 2017, but was already years behind schedule when the coronavirus pandemic delayed sea trials until August 2021. Flight trials for the Vikrant’s aircraft are scheduled to begin in November, with full operational status reached by mid-2023. The final price tag was about $2.5 billion higher than original estimates.

The new ship is technically India’s third aircraft carrier. The first is a Russian-built Kiev-class carrier renamed INS Vikramaditya that entered service in 2013 and has been refitted several times, most recently in August 2022.

The Vikramaditya was constructed in 1987 and served the Soviet Union and Russian navies until it was decommissioned in 1996 and sold to India in 2004. It is slightly larger than the Vikrant and carries a few more aircraft, but uses older technology.

India also operated a much older British-made carrier built at the end of World War II under the name HMS Hercules. India bought the ship and commissioned it under the name INS Vikrant in 1957. The old Vikrant saw action during the war to make Bangladesh independent from Pakistan in 1971, after causing some embarrassment for the Indian Navy by sitting out the Indo-Pakistani War of 1965. The first INS Vikrant was decommissioned in 1996.

India purchased another British carrier in 1985, a ship that participated in the Falklands War against Argentina under the name HMS Hermes. India rechristened the carrier in 1987 as INS Viraat and operated it until 1987, at which time it held the distinction of the longest-serving aircraft carrier in the world.

The new Vikrant is roughly comparable to China’s first indigenously-produced carrier, the Shandong. China, like India, began with an old retrofitted Russian carrier, which was renamed Liaoning. China’s third carrier, the Fujian, is larger and considerably more advanced than Shandong or Vikrant, boasting a flat deck and triple launch catapults instead of the “ski slope” design. International military analysts believe China is still working out the kinks in the Fujian’s launch system.

The Indian Navy would like a third carrier, and officials at the shipyard that built Vikrant say they learned many lessons from the much-delayed 13-year construction cycle for the first indigenously-built ship, but the Indian government has yet to budget for another aircraft carrier.

“You can’t build carriers overnight, it takes time and, therefore, it’s very important that we have more ships like Vikrant which can protect our fleet, travel far and knock out enemy ships before they can get to the aircraft carrier or to other ships,” retired Indian Vice-Admiral AK Chawla told the BBC on Friday.