Hochul’s Office Won’t Say if Gov. Will Give Up Armed Security 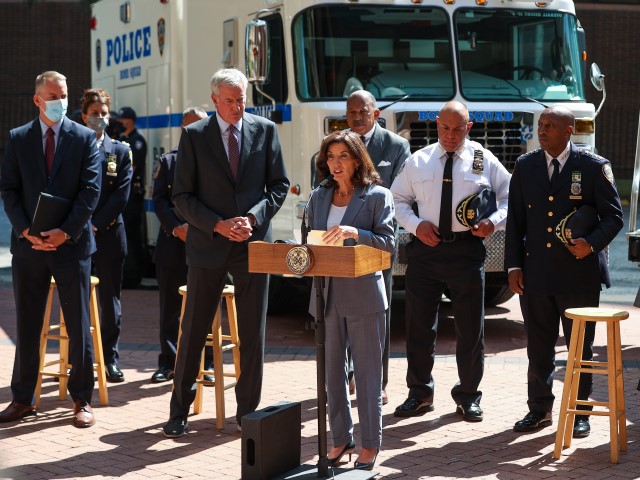 Breitbart News contacted New York Gov. Kathy Hochul’s (D) office Thursday to see if she would disarm the good guys who protect her with guns in the same way that she is forcing average Americans with guns to disarm around New York.

Her office could not say whether Hochul will be giving up her good guys with guns.

The person with whom we spoke indicated here has been no policy statement on it yet.

On September 1 Breitbart News reported that Hochul tweeted information on the state’s new gun controls and contended that good guys with guns do not stop armed bad guys.

FOX News quoted Hochul saying, “This whole concept that a good guy with a gun will stop the bad guys with a gun, it doesn’t hold up. And the data bears this out, so that theory is over.”

On August 31 Hochul tweeted the many locations in which law-abiding citizens will be prohibited from being armed for self-defense:

Starting tomorrow, concealed weapons will no longer be permitted on subways, in bars, and the following sensitive locations. pic.twitter.com/RKExUOBlrT

But Hochul’s office could not say whether or not the Governor will retain the good guys with guns who keep her safe day in and day out.

Breitbart News suggested Hochul’s retaining armed protection for herself, after barring law-abiding, average Americans from being armed for self-defense, could give the impression that the lives of average Americans are not held in the same high esteem as the lives of the ruling class. We were transferred to Hochul’s press office after making that point, and our call was answered by voicemail.

Newsom Claims Media Does Not Support Dems Enough, Despite Media Always Taking the Left’s Side