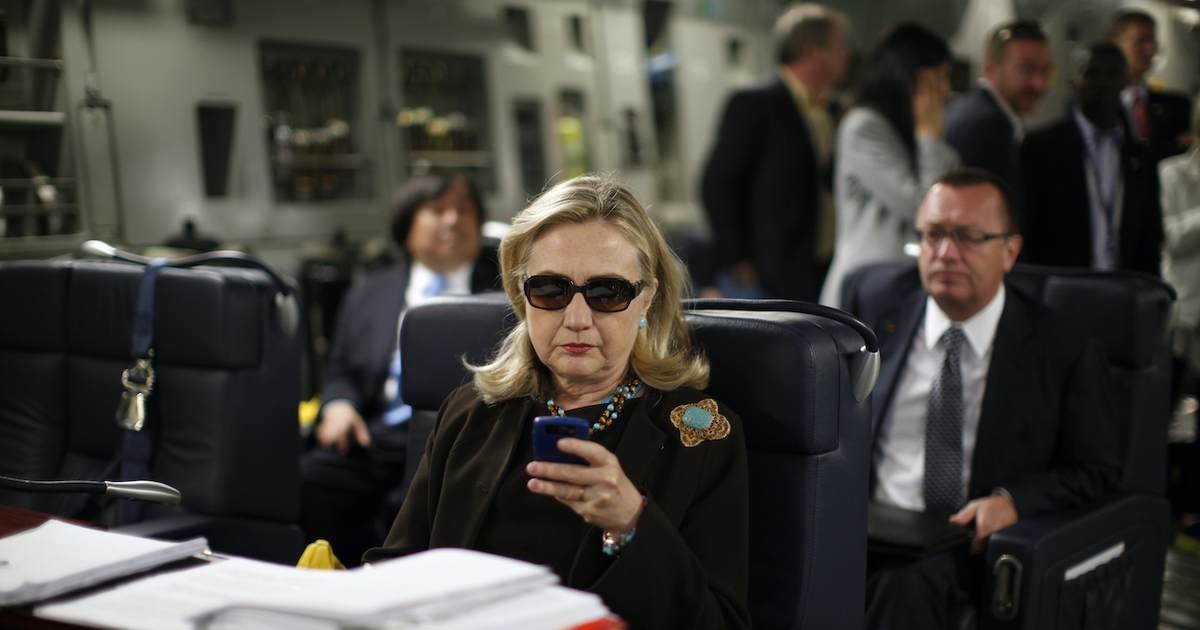 In the wake of the raid on President Donald Trump’s Mar-a-Lago home and the FBI’s seizure of documents and other items, many people have been comparing the situation to that of Hillary Clinton’s private server, noting the vast difference in how the two matters were handled, with no raid, despite the destruction of emails under subpoena and the smashing of Blackberrys by members of her team.

But Hillary Clinton is upset that this situation with Trump has focused attention on what she did and how she got a pass for it. She threw a hissy fit on Twitter claiming that she didn’t have any classified material on her private server.

I can’t believe we’re still talking about this, but my emails…

As Trump’s problems continue to mount, the right is trying to make this about me again. There’s even a “Clinton Standard.”

The fact is that I had zero emails that were classified.

Comey admitted he was wrong after he claimed I had classified emails.

Trump’s own State Department, under two different Secretaries, found I had no classified emails.

I’m more tired of talking about this than anyone, but here we are.

If you’re interested in the facts, you can read more here:https://t.co/lp7XqnSd4G

She then cites an article written by a guy who previously wrote about the “vast rightwing conspiracy” against her and doesn’t have any citations for the claims he makes about the classified material.

Here’s what Comey said in his official statement at the time they made the decision not to prosecute her.

With respect to the thousands of e-mails we found that were not among those produced to State, agencies have concluded that three of those were classified at the time they were sent or received, one at the Secret level and two at the Confidential level. There were no additional Top Secret e-mails found. Finally, none of those we found have since been “up-classified.” [….]

For example, seven e-mail chains concern matters that were classified at the Top Secret/Special Access Program level when they were sent and received. These chains involved Secretary Clinton both sending e-mails about those matters and receiving e-mails from others about the same matters. There is evidence to support a conclusion that any reasonable person in Secretary Clinton’s position, or in the position of those government employees with whom she was corresponding about these matters, should have known that an unclassified system was no place for that conversation. In addition to this highly sensitive information, we also found information that was properly classified as Secret by the U.S. Intelligence Community at the time it was discussed on e-mail (that is, excluding the later “up-classified” e-mails).

None of these e-mails should have been on any kind of unclassified system, but their presence is especially concerning because all of these e-mails were housed on unclassified personal servers not even supported by full-time security staff, like those found at Departments and Agencies of the U.S. Government—or even with a commercial service like Gmail.

Hillary has been trying to promote this malarkey about classified information since 2016 and was called out exactly on this in a 2016 FactCheck. While Comey said that 3 of the emails marked classified might have been improperly marked, that doesn’t begin to deal with all the other classified information. She’s playing a word game with “marked” or not marked when some things are inherently classified, as she knows.

Comey specifically contradicted her claims in his July 7, 2016 testimony before Congress.

Video clip, Rep. Trey Gowdy, R-S.C.: Secretary Clinton said there was nothing marked classified on her emails either sent or received. Was that true?

Comey: There was classified material emailed.

It’s both hilarious and pretty sad that she’s still trying to wiggle her way out of this. She’s so upset that even in this case, she comes out looking worse than Trump. But when you’re a horrible human being fixated on the one office you can’t have, you get her twisted response. She’s even tried to raise money off the Ma-a-Lago raid. She should be grateful that she wasn’t prosecuted for any of the things that she’s done. But she’s still trying to hit back at Trump because she lost and can’t get over it. He’s still living rent-free in her head.