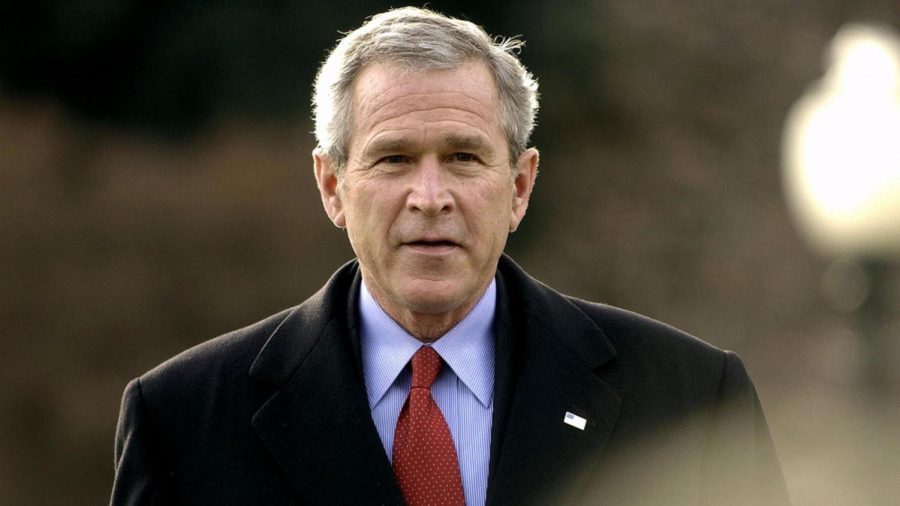 George Bush spoke about his presidential and personal life at the Face to Face forum last week.

Most people have never seen a U.S. president, current or former, in the flesh. So, when the Face to Face Speaker Forum Series announced that it would be hosting a conversation between former President George Bush and Pulitzer Prize-winning historian Jon Meacham, you’d be hard-pressed to find a political science major at Wake Forest that wasn’t planning on attending. Because it was held so close to the 21st anniversary of the Sept. 11 attacks, even students on the pre-med track were leaving their dorm rooms for the first time in months to watch President Bush graciously impart his wisdom upon the Wake Forest student body.

Except, I’m not sure how much of what he said was actual wisdom.

As a political science major myself, I was excited to attend the forum. Bush started off with a few anecdotes about his time in the White House and experiences with his family. I laughed as he told us about how his mother, Barbara Bush, had called him her “favorite son over the phone”. I stopped laughing, however, when he brought up First Lady Mary Todd Lincoln. Bush talked about how sorry he felt for President Abraham Lincoln because his wife was simply depressed all the time instead of supporting her glorious husband through the trials and tribulations of the presidency. Mary Todd Lincoln, who lost a child in infancy, another in adolescence, and a third in his teenage years. Mary Todd Lincoln, witness to her own husband’s homicide. How dare she be depressed? Thank goodness Laura Bush never complained.

What I think I have learned is that there is something to be said about inviting a war criminal to a well-established educational institution in order to say his piece, and not something incredibly positive.”

There are a lot of ways to avoid having to place blame upon yourself or others for actions you know were wrong. One such method is to place the blame on some kind of divine entity, like saying that God told you to end the tyranny in Iraq. Another method is by conveniently replacing the word “riot” with “stuff”. During the talk, Bush went into an inordinately long monologue about how the Jan. 6th “stuff” was wholly unjustifiable and a blatant attack on American democracy. However, he pointed out that in the face of such terror, “American political institutions held”. He is, of course, talking about the same political institutions that provided a reality TV show host with power and influence so unbridled that he found himself capable of inciting such a riot in the first place.

Bush then went on to talk about his personal experiences while in office. He started off by announcing to the crowd before him that he had handled the most difficult presidency since Lincoln, at which point I swear I heard Roosevelt and Hoover turn over in their graves. He discussed his PEPFAR emergency plan, which was aimed at addressing the HIV/AIDS pandemic in Africa, and ultimately provided treatment for 21 million people. This conversation topic that came up super organically, with the former President asking the crowd if they knew what PEPFAR was, saying “no one ever talks about PEPFAR” and proceeding to explain what it was as if parading around this one good initiative would wipe away the 269 war crimes his administration was found liable for.

Bush also talked about his parents, with a special focus on his father, George H.W. Bush, the 41st president of the United States. He even went as far as to read out a letter his dad sent him in which Bush Sr. basically said that he was proud of his son for making the “right decision” by invading Iraq. The same war that killed roughly 200,000 Iraqi civilians as the United States searched for weapons of mass destruction which we now know Iraq did not actually have. But hey, hindsight is 20/20 right? Besides, why shouldn’t the only nation to ever deploy a nuclear weapon against a civilian population get to decide who gets nukes?

It is surprising to me that, after all was said and done, there were still people who walked away from that keynote address impressed at the 43rd president’s magnetism and agreeable nature. Good old Southern charm can only get you so far. The reality is, the former president is not only completely aware of all the offenses committed by him or under his administration, but he continues to deny that they are offenses at all. He does not regret the wars he started, the people they killed and the horrific global impact their legacy continues to have today. And he traveled all the way to Winston-Salem, North Carolina to tell us just that.

I tried to give the former president the benefit of the doubt, hoping that he had come to educate students on his unique experiences in office and not further some heinous political agenda. I will politely admit that I was wrong. But what I think I have learned is that there is something to be said about inviting a war criminal to a well-established educational institution in order to say his piece, and not something incredibly positive. To clarify, I do not think a former president, irrespective of who it may be, has no knowledge to impart upon the future of America. However, I do think that someone like former Bush should not have been given an avenue through which he could attempt to absolve himself of his numerous transgressions in front of a bunch of college students.

American Girl and other great books for history-loving kids