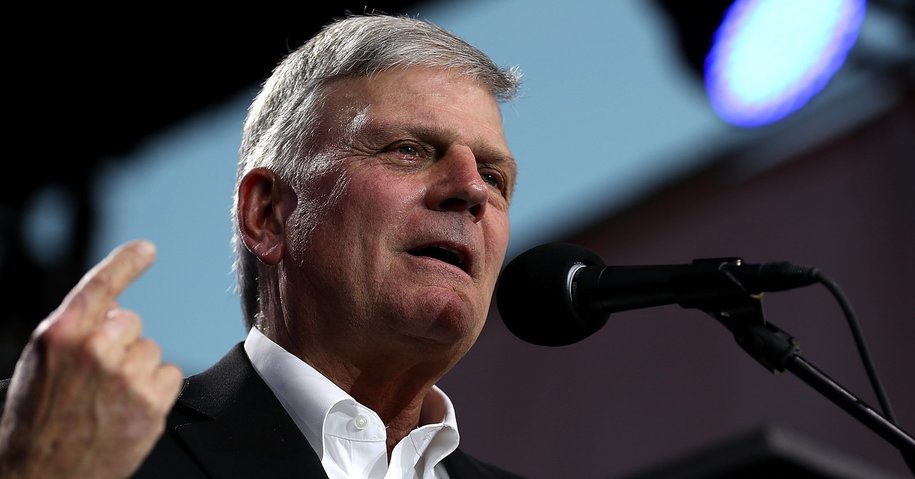 Graham took to Twitter on Friday to tout a package that his father’s organization had put together to warn us about the manifold dangers of progressive Christianity.

To anyone who has been paying attention over the years, this tweet might as well be the equivalent of a speech by Charlie Brown’s teacher. After all, this is coming from a guy who told us that ensuring a conservative majority on the Supreme Court was so important that we had to put a guy in the White House who was caught on tape reveling in degrading women. And this same guy claimed that the Republicans who voted to impeach Trump for inciting a violent insurrection had committed a betrayal as egregious as Judas’ betrayal of Jesus. Remember? Graham openly wondered if Speaker Nancy Pelosi had induced those ten Republicans to forget “all that (Trump) has done for our country” with “thirty pieces of silver.”

But believe it or not, that isn’t Graham’s lowest moment in recent memory. How do you get worse than joining the religious right in bullying the country into bowing and praying to an orange god it helped make? Quite easily, it turns out.

You may recall that Graham was one of the most prominent supporters of Saeed Abedini, an Iranian-born Pentecostal pastor who was thrown into jail in his home country in one of the most ham-handed efforts the mullahs have made to persecute Christians. But it turned out that Abedini had subjected his wife, Naghmeh Panahi, to physical and emotional abuse for several years. When Panahi came forward with her ordeal in November 2015, Graham actively tried to bully her into silence. He not only had the gall to ask Panahi if she was cheating on Abedini, but chided her for moving back in with her parents. He even went as far as to arrange for Abedini to fly to Idaho in hopes of orchestrating a reunion, forcing Panahi to scramble to court to get a temporary protection order.

Despite these and other instances of victim-blaming and victim-shaming of the worst type, Panahi refused to give in and divorced Abedini. Graham has no regrets; he crassly told The Washington Post that wondering if Panahi was unfaithful was “a good question to ask.”

When I first saw Graham’s pearl-clutching tweet, I recalled an encounter I had in my sophomore year at the University of North Carolina with members of the hypercharismatic campus ministry that burned me in my freshman year. I was sitting in the Pit, the central gathering area of campus, when the participants in a campus-wide march to celebrate National Coming Out Day came back around. I was sitting with three of the girls I’d met in that campus ministry who were talking about how someone chalked a bunch of anti-gay messages to counter the march. I didn’t understand what the big hooey was, prompting one of my former “sisters” to peddle the usual line about homosexuality being a sin. The other girls chimed in, saying I shouldn’t condone the gay lifestyle.

By this time, I knew that these girls, and the others in that bunch, had no problem with the fact that the pastor of the church in nearby Durham that had “planted” their group had willfully concealed his past in Maranatha Campus Ministries, a notorious “campus cult” from the 1970s and 1980s. Indeed, that church had grown out of Maranatha’s chapter at Carolina. Indeed, they were not only willing to condone the deceit, but were willing to be complicit in it. For this reason, in all the times I’ve replayed this conversation over the last quarter-century, I don’t understand how I kept my composure. Here they were, willing to aid and abet a pastor who was actively deceiving students at Carolina and three other schools in the Triangle—and they had the gall to lecture me about condoning gay rights. Indeed, many of my former friends in that bunch have gone far and fast in that church, as well as sister churches in their network. And they think they can lecture us about what we shouldn’t condone after being willing to condone their pastor’s deceit? If I ever see them—as I might during homecoming in Chapel Hill next month—I have to admit it will be all I can do to keep from yelling at them, “What nerve you have!”

It’s the same thing I feel like yelling at Graham. He’s willing to enable an outright criminal president, and then attempt to bully a domestic violence survivor—and he thinks he has the right to tell us about morality? If Graham were to look behind him, he’d probably see that not many people are following him. Nor should they.

9 Ways to Get Your Unsaved Loved Ones to Church