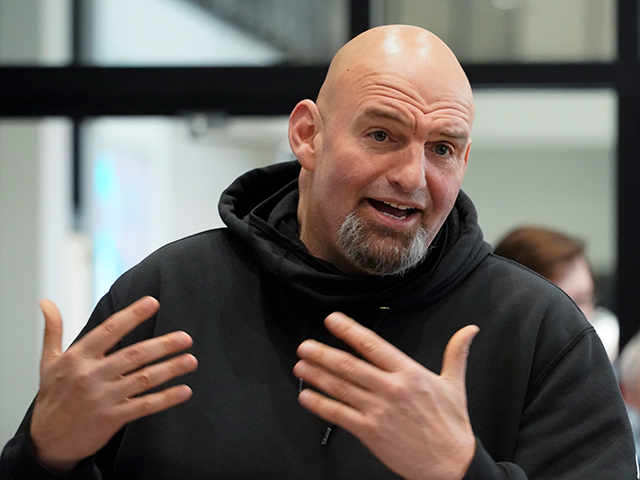 Similar to his previous mishaps, Fetterman again confused Washington D.C. with New Jersey as he concluded his speech with a call for the voters to send him to the nation’s capital.

“Eliminate the filibuster, get things done,” he struggled to say.

After an awkward pause in which he appeared slightly confused, Fetterman then said, “Send us back to New Jersey. Send me to D.C. for you.”

Several members of the audience could be heard chuckling upon hearing him utter New Jersey.

“Send us back to New Jersey and send me to DC.” pic.twitter.com/NZOGqzd6KN

The speech comes after the Fetterman campaign has refused to release the results of his latest cognitive test, which has appeared to have declined following his stroke earlier this year. As Breitbart News profiled:

An article from the Inquirer explains that Fetterman’s campaign claims that the candidate for the United States Senate in Pennsylvania has taken a cognitive test, the results of which allegedly reveal that his brain is functioning normally for an adult of his age.

The Philadelphia Inquirer did not, however, receive any documentation of the results of his cognitive test. Nor did they inform the media who administered and scored the test.

The article explains that the Fetterman campaign “did not provide any documentation of the results, or make available to the media the speech therapist who administered the tests.” The cognitive assessment of the Democrat candidate comes after he suffered a stroke in May.

After dodging a debate challenge from his opponent, celebrity Dr. Mehmet Oz, for weeks, Fetterman finally agreed to debate Oz on October 25 after his poll numbers began to slip and liberal commentators warned his hiding could cost him what once appeared like assured victory.

Last week, the Fetterman campaign issued a “wake-up call” after learning that the Oz campaign has been outspending them in television ads.

“I am writing with a wake-up call,” Fetterman campaign manager Brendan McPhillips wrote. “In the last three weeks alone, Republicans have spent nearly $12 million dollars — significantly outspending us and out-communicating on the airwaves. We cannot allow this to continue unabated.”