Facing Indictment, Steve Bannon Set to Turn Himself in to New York Prosecutors 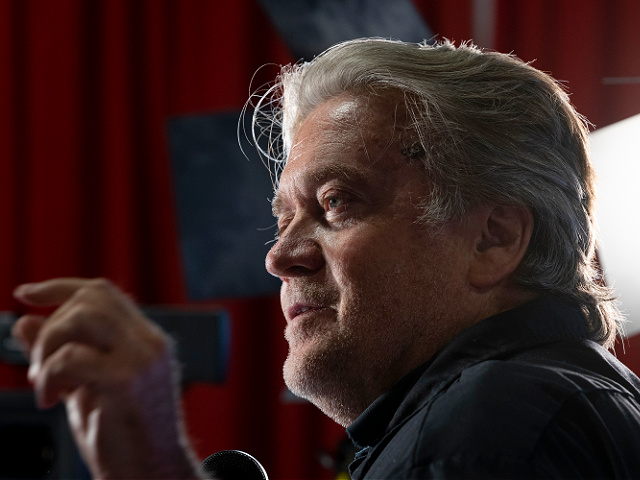 Former White House Chief Strategist Stephen K. Bannon is set to surrender himself to New York prosecutors on Thursday to face a new criminal indictment, according to a Washington Post report.

Although the details of the criminal indictment against Bannon are still sealed, the charges reportedly stem from Bannon’s involvement in “We Build the Wall,” an online fundraising effort that purported to raise money to finish the construction of the southern border wall.

Bannon faced federal charges stemming from his involvement in that fundraising effort, and he pleaded not guilty in August 2020 but received a pardon from former President Donald Trump in the last days of his presidency.

Bannon blasted the Manhattan District Attorney for pursuing “phony charges” against him just two months before the midterm elections in a statement released Tuesday evening.

Just days after being swatted three different times by deranged thugs from New York City inspired by the Biden Administration to assassinate me by police, the Soros-backed DA has now decided to pursue phony charges against me 60 days before the midterm election because WarRoom is the maior source of the MAGA grassroots movement.

The SDNY did the exact same thing in August 2020 to try to take me out of the election. It didn’t work then, it certainly won’t work now. This is nothing more than a partisan political weaponization of the criminal justice system.

“I am proud to be a leading voice on protecting our borders and building a wall to keep our country safe from drugs and violent criminals,” Bannon continued. “The WarRoom show will be more vital, more intense, more urgent, and bigger this time.”

“They are coming after all of us, not only President Trump and myself. I am never going to stop fighting. In fact, I have not yet begun to fight. They will have to kill me first,” Bannon concluded.

New York’s indictment comes less than two months after a jury convicted Steve Bannon of contempt of Congress for his refusal to cooperate with the January 6 Committee.

Bragg’s office will also be getting help from New York Attorney General Letitia James’s office, according to the Washington Post.

Jordan Dixon-Hamilton is a reporter for Breitbart News. Write to him at jdixonhamilton@breitbart.com or follow him on Twitter.