Facebook just keeps finding new ways to be awful. The latest stunt is to jump into the comments section of your posts to insert some approved agitprop that stays near the top of your feed. 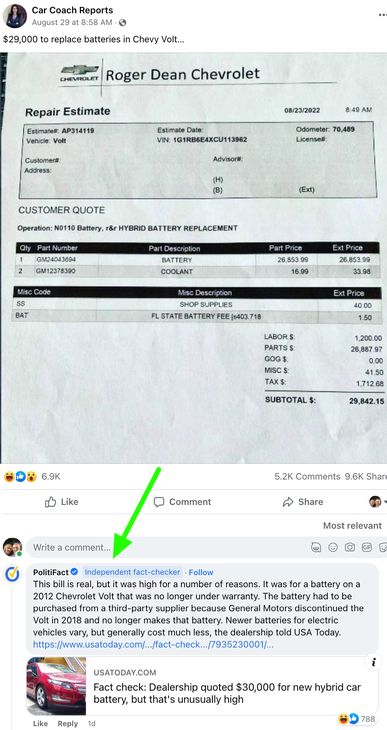 This particular “fact” check concerns an estimate from a car dealership showing that a customer would be charged nearly $30,000 for an EV battery for his Chevy Volt. A Facebook page called Car Coach Reports, which focuses on auto news, posted a picture of the invoice on August 29. Two days later, PolitiFact waded into the comments section to add their take on the story—namely that the battery in question was for a 10-year-old vehicle with 70,000 miles that is no longer under warranty. PolitiFact wrote, “The battery had to be purchased from a third-party supplier because General Motors discontinued the Volt in 2018 and no longer makes the battery.” They quickly added that newer batteries “cost much less.”

On the “fact” checker’s website we learn that “The average cost of a replacement battery in an electric vehicle is about $6,300… though that price can be higher depending on the vehicle in question.” Prices can range anywhere from $6000 to $20,000.

As an aside, this is more proof that EVs are mostly for elitists with lots of disposable cash. Your average plumber or third-grade teacher is never going to be able to afford a new EV, let alone pay for maintenance on the vehicle. Setting aside the planned obsolescence of electric cars, how many average Americans can afford to shell out $6000 (at minimum) for a battery every ten years? Our family has never owned a car that cost more than $10,000, with the vast majority of them coming in under $5000.


But getting back to that fact-check comment, Ayobami Olugbemiga, from Meta’s Policy Communications department, told PJ Media in an email, “We have launched a pilot program on Facebook that aims to show people more reliable information and empower them to decide what to read, trust and share.” He explained that “A small group of our US third-party fact-checking partners has the ability to comment in English and Spanish to provide more information on public Facebook posts that they determine could benefit from more context.”

Olugbemiga referred us to the company’s recent Community Standards Enforcement Report, which explains the new program. According to the report, the effort is “separate” from Facebook’s third-party fact-checking program: “The comments aren’t fact-check ratings. They won’t result in any enforcement penalties for content owners, nor will they impact a post’s distribution or the overall status of a Page.”

Meta says that the comments will “appear on Facebook posts that may not be verifiably false but that people may find misleading.” Newspeak, anyone?


Yeah, right, totally non-biased “independent” fact-checkers who work day and night to shut down conversations on Facebook that don’t go along with the approved Narrative. (True story: PJ Media and the rest of the Townhall Media sites have essentially been shut out of Facebook. Social media used to be a huge driver of traffic to the site—not to mention revenue—but now it’s next to nothing. Help us fight back by becoming a VIP member.)

Even though we’ve been conditioned to believe that the comments sections on our posts are ours, the reality is that Facebook owns them and has the right to take over and post anything they want. (Reminder: The main reason Facebook was granted Section 230 protections by the federal government is that they claimed they didn’t want to be held liable for what people write in the comments section.)

I can’t say for sure, but it looks like the warning only served to amplify the post about EV batteries. At publishing time, it had more than 10,000 shares and over 5,000 comments, most of them mocking the elitists who think it’s no big deal if a car battery will cost the average American more than 10% of his or her annual salary.

A commenter named Andre wrote, “lol 10 years and no more battery cause it got discontinued. Not getting parts for a 1972 car might be understandable but a 2012 , and this is supposed to be the future. You people are insane.”

“So every few years one must buy a new 60,000 dollar car?” Gene asked. “We all do not make the kind of money you all make but you all are trying to force us to live your standards without the money. When common sense was handed out I see many of these people were reaching out the other way.”

Garry wondered, “What will be the price in five years from now on a 2022?” We are wondering too, Garry.

Debbie said, “it’s ridiculous. It’s a 10-year-old car!!! Most Americans keep new cars for 12 years. Someone needs to check reality.” Sorry, Debbie, the climate alarmists don’t deal in reality. The only thing they can say with certainty is that you’ll get stuck with the bill.

David hit the nail on the head with this: “Let’s see if I have this right: The story is true but runs counter to the narrative you want to push. We all have to deal with aftermarket parts if we maintain our cars for a long period of time. Not to mention that this battery only had 70K miles on it. Shame on you, PolitiFact…..shame on you.” We couldn’t agree more, David.

Susan responded with what we’re all thinking upon reading this story: “Here’s a factoid, this car owner is screwed.” Yup.


Meta claims that they will continue to “give post owners the freedom to hide or delete comments on their posts if they choose.” How long do you think that will last?

Have you seen one of these comments from the “fact” checkers on any of your posts? Let me know in the comments if you were able to remove it.

Kim Kardashian gets backlash for spending ‘Friendsgiving’ with Tristan Thompson