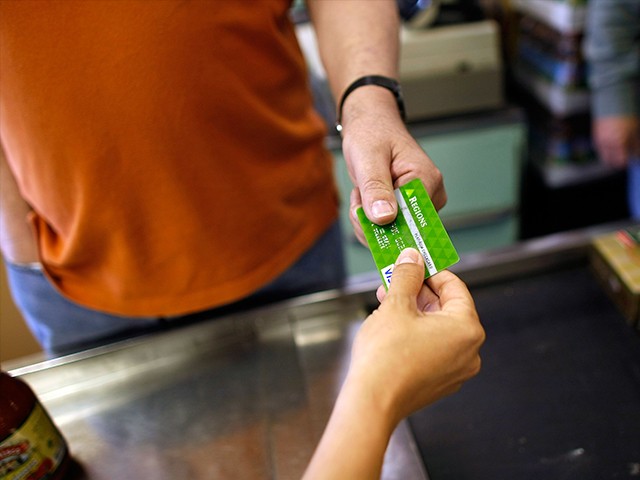 Breitbart News reported that the credit card companies were under pressure from New York Democrats — including New York Gov. Kathy Hochul (D) — to recategorize gun sales so they could be flagged.

On September 10, 2022, Visa caved to Democrat pressure and agreed to recategorize gun sales, giving them a special code so they would stand out from other sporting goods or general merchandise purchases.

Mastercard and American Express capitulated to Democrat demands as well.

In a letter dated September 20, 2022, and addressed to the CEOs of Visa, Mastercard, and American Express, 24 attorneys general said in part:

The new code will not protect public safety. Categorizing the constitutionally protected right to purchase firearms unfairly singles out law-abiding merchants and consumers alike. First, efforts to track and monitor sales at gun stores would only result in vague and misleading information. This categorization would not recognize the difference, for example, between the purchase of a gun safe and a firearm. Nor would it capture firearm purchases made at department stores, resulting in arbitrarily disparate treatment of “gun store” merchants and consumers.

More importantly, purposefully tracking this information can only result in its misuse, either unintentional or deliberate. Creating and tracking this data only matters if your institutions are considering using that information to take further, harmful action—like infringing upon consumer privacy, inhibiting constitutionally protected purchases by selectively restricting the use of your payment systems, or otherwise withholding your financial services from targeted “disfavored” merchants.

They closed the letter with these two paragraphs:

Social policy should be debated and determined within our political institutions. Americans are tired of seeing corporate leverage used to advance political goals that cannot muster basic democratic support. The Second Amendment is a fundamental right, but it’s also a fundamental American value. Our financial institutions should stop lending their market power to those who wish to attack that value.

Be advised that we will marshal the full scope of our lawful authority to protect our citizens and consumers from unlawful attempts to undermine their constitutional rights. Please keep that in mind as you consider whether to proceed with adopting and implementing this Merchant Category Code.

✅24 AGS TO CREDIT CARD GIANTS: Be advised that we will marshal the full scope of our lawful authority to protect our citizens and consumers from unlawful attempts to undermine their constitutional rights.”

AWR Hawkins is an award-winning Second Amendment columnist for Breitbart News and the writer/curator of Down Range with AWR Hawkins, a weekly newsletter focused on all things Second Amendment, also for Breitbart News. He is the political analyst for Armed American Radio and a Turning Point USA Ambassador. AWR Hawkins holds a PhD in Military History with a focus on the Vietnam War (brown water navy), U.S. Navy since Inception, the Civil War, and Early Modern Europe. Follow him on Instagram: @awr_hawkins. You can sign up to get Down Range at breitbart.com/downrange. Reach him directly at awrhawkins@breitbart.com.