Defenestration: Prague’s History of Literally Throwing Authority Out the Window 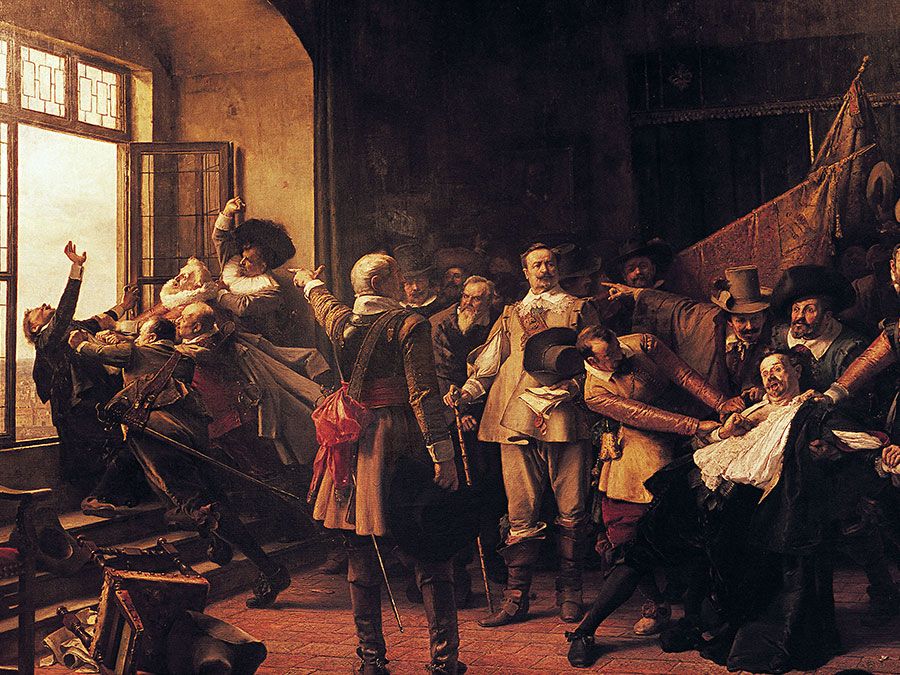 Prague, the capital of the Czech Republic, is famous for its rich heritage and variety of architectural styles. But did you know that an integral part of the city’s history involves people being thrown out of windows?

Prague’s past is home to a series of defenestrations, a term that refers to the act of throwing someone out of a window. Today it is more commonly used to describe the removal of someone from a position of power. But the two meanings are related, and the connection can be traced back to this central European city.

The earliest recorded defenestration in Prague occurred in 1419 at the hands of the Hussites, the followers of religious reformer Jan Hus. Sources report Jan Želivský, a Czech priest, led a crowd of Hussites to the New Town Hall demanding the release of imprisoned supporters. Exact details of the incident remain uncertain; per one account, opponents verbally insulted the crowd, while another reports that someone threw a stone at Želivský. Enraged, the Hussites stormed the building and threw a number of councilors from the windows of the building. The incident served as a spark to the Hussite Wars, a period of conflict between the reformers and the Roman Catholic rulers that would last until 1436.

The incident was followed by another defenestration at the hands of the Hussites. In 1483 the reformers felt pressured by Roman Catholic officials and rose up against councilors in municipalities across the city. Similar to the previous riot, these attacks involved a number of councilors being thrown from the windows of several town halls. However, unlike the previous incident, it did not lead to outright war.

The city’s most notable defenestration took place in 1618 in what is known simply as the Defenestration of Prague. After Roman Catholic officials halted the construction of Protestant chapels, an assembly of Protestants was called to defend their religious liberties guaranteed by the 1609 Letter of Majesty of the Holy Roman emperor Rudolf II. On May 23, 1618, two imperial regents were tried and found guilty of violating the letters, and they⁠—along with their secretary—were thrown from the windows of the council room of Prague Castle. Although the victims survived, the incident began the Bohemian revolt against the Habsburg emperor, marking the beginning of the Thirty Years’ War. In fact, the incident was so famous that it gave rise to the term defenestration itself.

Prague’s storied history of defenestration continued into the modern age as well. After the communist takeover of Czechoslovakia on February 25, 1948, Foreign Minister Jan Masaryk decided to stay at his post at the request of President Beneš. On the morning of March 10, 1948, Masaryk was found lying dead on the pavement below the bathroom window of his residency at the Foreign Ministry. Although the death was initially ruled a suicide, there were suspicions that Masaryk had been defenestrated by communist agents. The investigation into his death was reopened numerous times over the course of multiple decades, and a 2004 police report ruled that at least one other person had been involved in his death. However, the case was reopened in 2019 and closed two years later after concluding that the involvement of additional people in his death could neither be confirmed nor denied due to a lack of evidence. At least for now, Masaryk’s death remains the mysterious final chapter in Prague’s history of defenestration.

Ken Burns Gets at the Nasty Underbelly of American History

Review: ‘The Car’ an exhilarating ride through the history of mechanical motion | Features