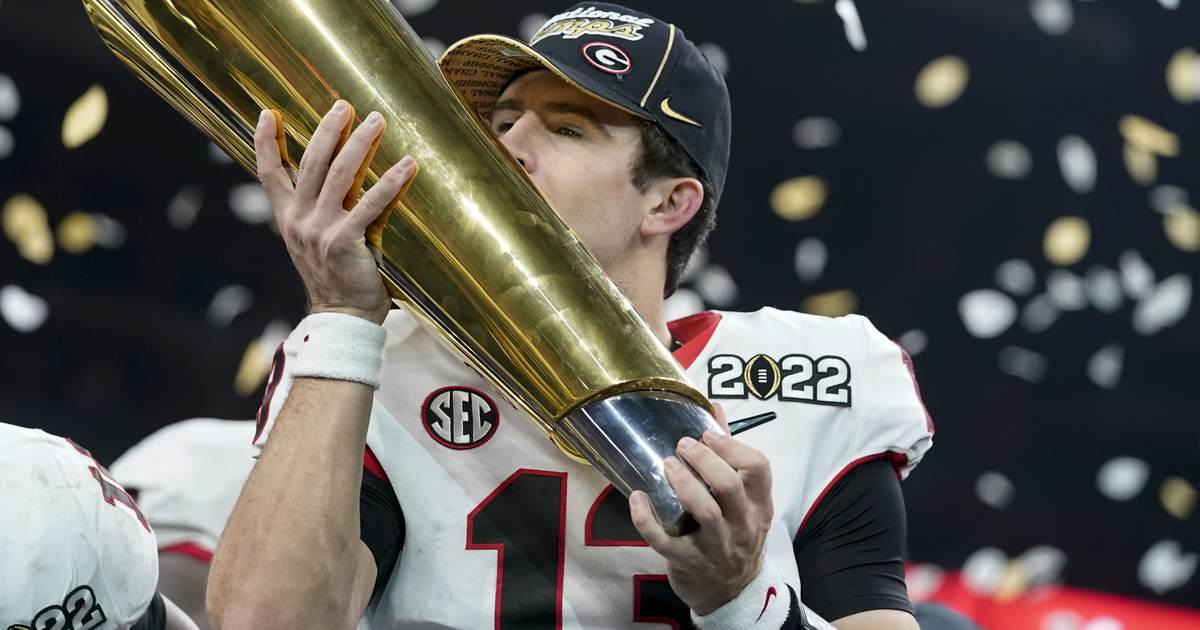 It’s the first full-blown college football weekend of 2022. (Sure, we had some games last weekend, but most credible media outlets considered last week “Week 0” and this week “Week 1.”)

𝗢𝗙𝗙𝗜𝗖𝗜𝗔𝗟: College Football Playoff Board of Managers Votes to Expand Playoff to 12 Teams

But college football could move to an expanded playoff earlier if it’s feasible to do so.

“The board has tasked the College Football Management Committee (the 10 conference commissioners and the Director of Athletics at the University of Notre Dame, who run the playoff) with assessing the possibility of beginning the expanded playoff in either the 2024 or 2025 regular season,” the CFP press release announced.

The current four-team playoff structure has stirred up controversy just about every year since it began in 2014, usually because the format leaves one or two good teams out of the mix. Conference commissioners have been arguing for an expanded playoff for years now, and it looks like the CFP has finally heard them.

“Friday’s news was both stunning and long-awaited. The proposal that the board approved was nearly identical to the one initially proposed more than a year ago by a CFP subcommittee that included SEC commissioner Greg Sankey, Big 12 commissioner Bob Bowlsby, Mountain West commissioner Craig Thompson and Swarbrick,” reports The Athletic. “They believed it to be the best possible compromise for all involved, prioritizing both conference champions and at-large access.”


The CFP Board of Managers is aware of how big a deal this is.

“This is an historic and exciting day for college football,” said Mark Keenum, President of Mississippi State and CFP Board of Managers chairman in the statement. “More teams, more participation and more excitement are good for our fans, alumni, and student-athletes. I’m grateful to my colleagues on the board for their thoughtful approach to this issue and for their resolve to get expansion across the goal line and for the extensive work of the Management Committee that made this decision possible.”

Related: The College Football Conversation That Could Rock the Sports World

Here are the logistics of what the board proposed:

2. The ranking of the teams will continue to be done by a selection committee whose size, composition, and method of selection will remain substantially unchanged. The Management Committee will modify the selection protocol as required by the change to the playoff structure.

3. The four highest-ranked conference champions will be seeded one through four and each will receive a first-round bye.

5. The model allows for first-round games to be played on either the second or third weekend in December in a way that best accommodates the format and the participating teams, with at least 12 days between the conference championship games and the first-round games. The Management Committee would make the final determination of the calendar.

6. Subject to reaching agreement with bowls, the four quarterfinal games and two Playoff Semifinal games would be played in bowls on a rotating basis.

7. The national championship game will continue to be played at a neutral site.

8. Subject to reaching agreement with bowls, the four highest-ranked conference champions will be assigned to quarterfinals bowls on selection day in ranking order, and in consideration of current contract bowl relationships if those bowls are selected for the rotation. For example, if the Pac-12 champion were ranked #1, the Big Ten champion were ranked #3, and the Rose Bowl were a quarterfinal site, the Pac-12 champion would be assigned to the Rose Bowl and the Big Ten champion would be assigned elsewhere.

9. With the four highest-ranked champions assigned to quarterfinal games in bowls, the opponent from first-round game winners will be assigned by the selection committee based on the bracket.

10. The higher seeds would receive preferential placement in the Playoff Semifinal games.

11. First-round games will not have title or presenting sponsors and existing venue signage will remain in place. The CFP will control the video boards.


Will the new format work? It remains to be seen, but we can be sure that the decision itself will generate plenty of conversation, and at least the first view years of the new playoff system will have tongues wagging. This is why college football continues to be the most exciting sport in the world.

10 Famous College Grads Who Prove How Smart College Makes You

Meghan Markle and Prince Harry to Move Into Windsor Castle

Richard Simmons and I ‘had so much fun together’ before he left spotlight, Denise Austin says: ‘Greatest guy’