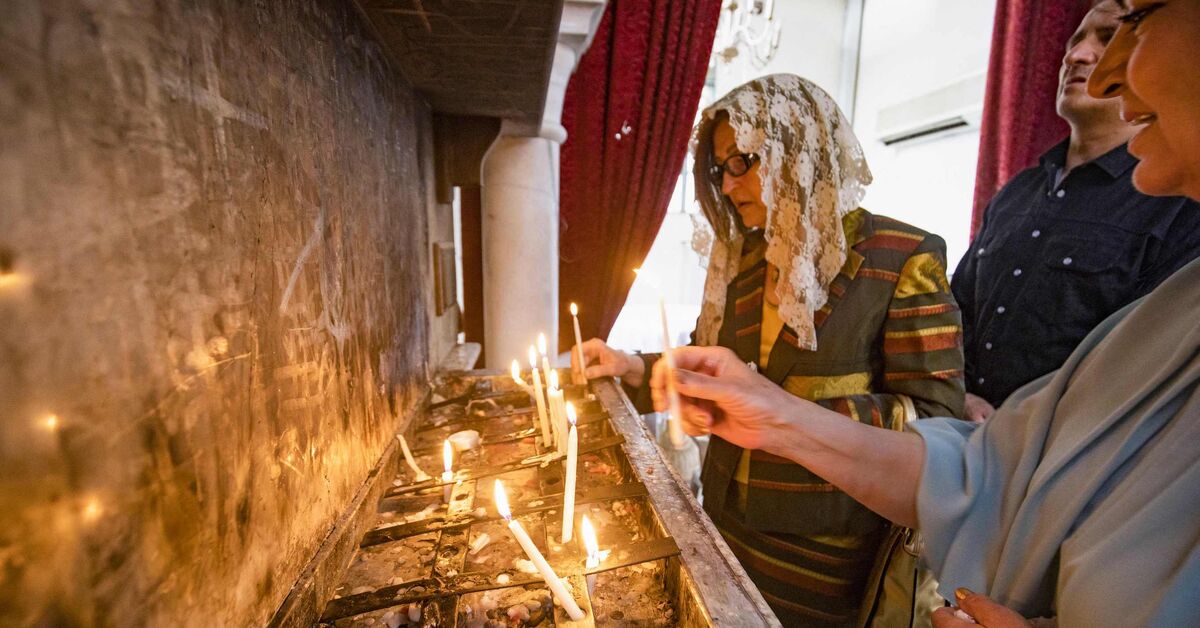 ALEPPO — Christians in Syria’s northwestern province of Idlib celebrated Saint Anna’s Day Aug. 28 at an Armenian Apostolic Church dedicated to the saint, 10 years after the church was closed.

Religious rituals and hymn singing accompanied the inaugural celebration that was held in a joyful climate, amid security measures from Hayat Tahrir al-Sham (HTS), which controls the province.

The church was closed down shortly after the Syrian war erupted in 2011, after opposition and jihadist groups took control of Idlib, prompting the displacement of a large number of Christians toward areas under the Syrian government’s control.

A Christian notable residing in the village of Yacoubia, in the southwestern Idlib countryside, told Al-Monitor, “Dozens of Christians, including clerics, hailing from the villages of Qunaya, al-Jadida and Yacoubia in the Idlib countryside took part Aug. 28 in the opening ceremony of St. Anna’s church in Yacoubia. The ceremony was held on Saint Anna’s Day, which is celebrated on the last Sunday of August of every year. The area’s Armenian Orthodox Christians would celebrate this day and practice their religious rituals before the outbreak of the Syrian revolution and before the government lost control over the area.”

He added, “It was a fabulous event and the attendees enjoyed the food and joyful atmosphere. For the first time in 10 years, Christians held a festive mass on Saint Anna’s Day in the village. Since the opposition and jihadist organizations took control of the area, the remaining Christians here have practiced their religious rites in a limited way and away from the media.”

He continued, “HTS leader [Abu Mohammed al-Golani] promised when he visited Christian villages in Idlib back in July and met with Christian dignitaries and clerics to protect Christians in these areas and to allow them to practice their religious rituals. He also promised that private property belonging to Christians will return to their owners and stressed that every Christian who was displaced from these areas is welcome to return to his town and home and can recover his property.”

The source added, “HTS’ security forces cordoned off the premises during the opening ceremony, set up checkpoints in the vicinity of the village and prevented the entry of anyone from outside the village to protect the Christians during the celebration.”

Golani met on July 19 with a number of Christians in Idlib. At the time, the HTS-affiliated Amjad Media Foundation published a photo of a meeting between Golani and a group of Christians from the Christian villages of Qunaya, Yacoubia and al-Jadida in the Jisr al-Shughur countryside in northwestern Idlib. But the details of the discussions were not made public.

The church opening and practice of Christian rituals publicly and under the protection of HTS sparked anger and criticism among jihadists who had defected from HTS.

Abu Hamza al-Kurdi, a jihadist residing in Idlib who defected from HTS, said on Telegram Aug. 29 the church opening comes as part of Golani’s plan to expand his power by exploiting religion.

Yasser Abu Muawiyah, a former jihadist who defected from Hurras al-Din and resides in Idlib, told Al-Monitor, “Golani is trying to get closer to Christians in Idlib. He is likely to give them more freedom in the future and to allow them to reopen more churches. Through this, Golani seeks to get closer to Europe and the United States and to convince the West that his organization has become moderate, no longer extremist, and that he no longer poses a threat to the rest of the Syrian social and religious components.”

Abu Muawiyah added, “Golani seems to be ready to make more concessions and is constantly sending direct messages to achieve his goal of gaining international acceptance and have the name of his organization removed from the terror blacklist so as to have a share in the future of Syria.”

He continued, “While Christians in Idlib are now allowed to practice their rituals and reopen their churches, Golani’s security forces are chasing, arresting and tightening the noose on jihadists.”

Christians in Idlib are distributed over a number of neighborhoods in the Idlib city center, in Jisr al-Shughur and in the villages of Qunaya, Yacoubia, al-Jadida, al-Ghassaniya and Hallouz in the Jisr al-Shughur countryside.

Before the Syrian revolution, some 10,000 Christians resided in the area. Most of Idlib’s Christians left their towns toward the government-controlled areas, after the opposition took control over their towns between 2012 and 2015. Only a small number of Christians have remained in these villages today and are mostly elderly.

Speaking on condition of anonymity, an HTS official told Al-Monitor, “Islam does not forbid sects and people of other religions from practicing their religious rituals. Based on that, Christians who grew up in Idlib have the right to practice their rituals freely. HTS deals with all Syrians in Idlib, regardless of their sects, equally and fairly. We must protect all Syrians, no matter their religious, sectarian and ethnic affiliations.”

What Is the Hopeful Message in the Hymn ‘In the Bleak Midwinter’?

Christianity is more than a religion, it’s a way of life