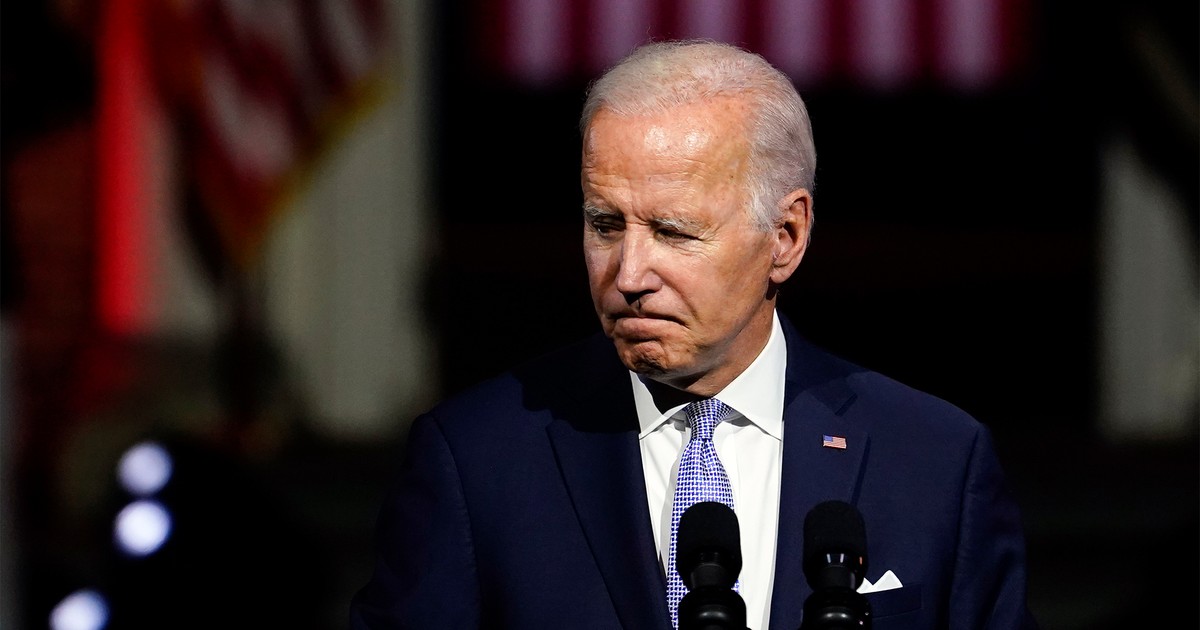 While some pollsters show the Republican lead in the generic ballot shrinking away, other polls make it difficult to understand how most Americans will vote for anyone supporting the Biden agenda. According to a new poll from Rasmussen, only 28% of likely voters think the country is heading in the right direction. This week’s finding is down two points from a week ago. On Sunday, an NBC News poll had a similar result, with only 27% of respondents saying the country was on the right track. The latest YouGov poll found 25%.


Meanwhile, Rasmussen found that 65% of voters believe the nation is headed down the wrong track, up three points from a week ago. Rasmussen closed this survey before President Biden’s 60 Minutes interview, which was an unmitigated disaster. The president committed U.S. troops to war against China if it invaded Taiwan, contradicting longstanding U.S. policy, among other blunders. He also had no honest answer to the inflation plaguing the country, using month-over-month numbers to tell Americans it isn’t as bad as they think. Anyone who has been grocery shopping knows he is lying.

After the botched Afghanistan withdrawal, Biden has maintained the approval of about one-third of the electorate. A year ago, Rasmussen found that 32% said the United States was heading in the right direction, while 62% said it was on the wrong track. The daily Presidential Tracking poll shows that 43% of likely voters approve of President Biden’s job performance, with less than one-quarter strongly approving. His net approval is -19, the same as on September 19 of last year.

Recommended: Biden Is Grasping at Straws as He Seeks a Winning Narrative for November

So while the generic ballot seems to be shrinking as undecideds start to make their selection, it is hard to believe Democrats will cover the gap. Voters are less happy with the direction of the nation than they were a year ago and no more pleased than they were with President Biden. Like it or not, he is the leader of the party, and he is setting the direction for the country.


The New York Times is already wondering aloud if the majority of polls will be as wrong as they were in 2016 and 2020. As Nate Cohn notes, the polls look eerily similar to the last two elections, when most polls overestimated Democrat leads. When he constructed a model that built in the previous polling error, Cohn concluded:

The apparent Democratic edge in Senate races in Wisconsin, North Carolina and Ohio would evaporate. To take the chamber, Republicans would need any two of Georgia, Arizona, Nevada or Pennsylvania. With Democrats today well ahead in Pennsylvania and Arizona, the fight for control of the chamber would come down to very close races in Nevada and Georgia.

Regardless of who was favored, the race for Senate control would be extremely competitive. Republican control of the House would seem to be a foregone conclusion.

The bad news for Cohn is that the Democrats’ comfortable leads in Arizona and Pennsylvania are evaporating. The latest poll from Trafalgar Group shows incumbent Senator Mark Kelly (D-Ariz.) is now clinging to a 1.2% advantage over Republican challenger Blake Masters. In the Arizona gubernatorial race, Trafalgar shows Republican Kari Lake with more than a four-point lead over the Democrat challenger. It is hard to believe Lake does not have coattails sufficient to push Masters over the line.


Trafalgar shows the Pennsylvania Senate race is neck and neck between Democrat John Fetterman and Republican Dr. Mehmet Oz. Fetterman increased his public events, and voters are starting to see how badly a stroke earlier in the campaign cycle impaired his communication ability. Recent interviews also displayed some of Fetterman’s more radical policies, like support for releasing one-third of Pennsylvania inmates. His once double-digit lead is gone.

Related: ‘I Got That!’ Joe Biden Snaps at Interviewer, Downplays Historic Inflation

As one of the most accurate pollsters for the last several cycles, Trafalgar also has North Carolina at +3 for the Republican in North Carolina’s Senate race and +5 in Ohio, indicating the leads may have already evaporated in those states. Trafalgar and two other pollsters have Republican Herschel Walker leading in Georgia, and the RCP average shows Republican Adam Lexalt up one point in Nevada.

As most likely voters are unhappy with the country’s direction, all of the Senate candidates would do well to tie their competitors to President Biden’s deeply unpopular agenda. Rasmussen also shows that 84% of likely voters are concerned about the economy, including 55% who are very concerned. Sixty-two percent also believe they will be paying more for gas in six months than they are now.


As one now grizzled old Democrat strategist once said, “It’s the economy, stupid.” Biden’s economic and energy policy is bankrupting middle America. Republicans should beat that drum loud and clear for the next 49 days.

Read This Article To Find Out If There Are Still Americans Stranded In Afghanistan!

What to Do in Greenville

Johnny Cash’s sister says the ‘Man in Black’ gave ‘his heart back’ to God before his death: ‘There is hope’