Biden’s stark warning: US threatened by its own citizens 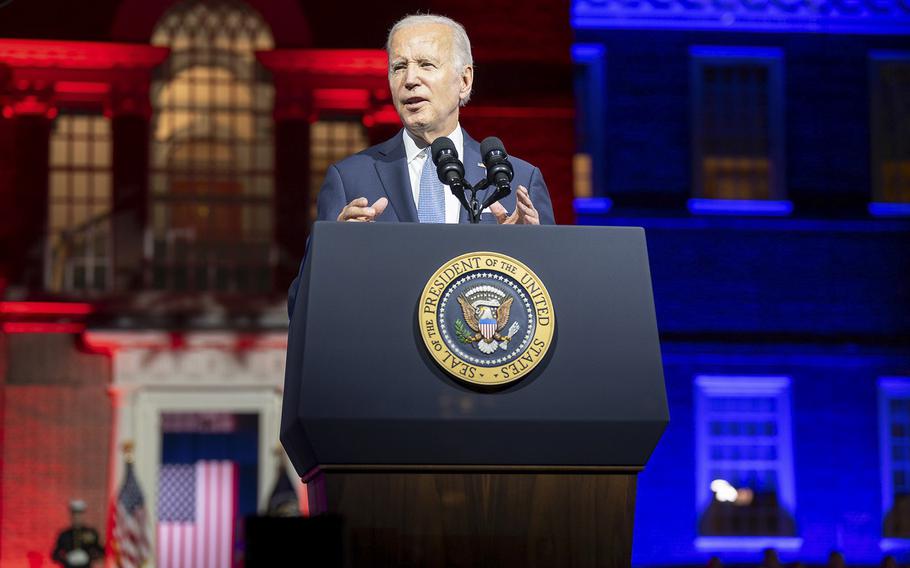 When American presidents reserve the prime-time hour to address the nation on grave threats facing the country, they are almost always focused on external forces – the Soviet Union, foreign terrorism, or even the coronavirus.

But when President Joe Biden stood before Independence Hall in Philadelphia on Thursday night, he warned that American democracy stands at the precipice because of a decidedly different threat – one that, he said, comes from within the country’s borders. “Donald Trump and the MAGA Republicans represent an extremism that threatens the very foundations of our republic,” Biden said.

In a remarkable turn, the president of the United States was identifying his predecessor and his followers – a group that arguably includes millions of U.S. citizens – as the gravest threat to the stability of the 246-year American experiment. Not since the Civil War has an American president issued such a stark warning about the behavior and menace posed by fellow Americans.

The assertion cemented Biden’s startling change from his campaign vision of unifying the country. Biden has long pinpointed Trump as uniquely unfit to govern, but his scorching rhetoric on Thursday widened the scope of the perceived threat to include the legions of “MAGA Republicans” who stand by Trump, his falsehoods and his assault on American norms.

The question for Biden, however, is whether he can successfully isolate “MAGA Republicans” as a bloc for the rest of the country to unify against, or whether so many conservatives and Republicans will feel targeted by the rhetoric that it will backfire. After all, more than 74 million Americans voted for Trump in 2020.

Beyond that, it’s not clear exactly who qualifies as a “MAGA Republican,” though Biden appeared to zero in on those who recklessly challenge election results and advocate political violence.

On Friday, Biden attempted to continue drawing a distinction, telling reporters, “I don’t consider any Trump supporter to be a threat to the country.” He added, “I do think anyone who calls for the use of violence, fails to condemn violence when it’s used, refuses to acknowledge that an election has been won, insists on changing the way in which you count the votes – that is a threat to democracy.”

Yet Trump supporters generally do all of those things, backing the former president’s calls to overturn the 2020 election and elect candidates who vow to rewrite election rules, and supporting his promise to pardon those who attacked the U.S. Capitol on Jan. 6, 2021.

Sen. Christopher Coons, D-Del., a longtime friend of Biden’s, said Thursday’s speech did not come naturally to the president. Coons noted that Biden was often criticized during his presidential campaign for being too optimistic about the prospect of uniting the country, mocked by fellow Democrats for predicting an outbreak of bipartisanship in Washington.

“I think it was very hard for him to decide to give this speech, and to give this speech,” Coons said. “It was full-throated. It was passionate. It was from his heart. But he has spent most of his first two years barely referencing the [former] president, trying to focus on moving forward, hoping that the country would come closer together rather than seem closer to breaking apart.”

He added: “I think it was only reluctantly that he chose to give such a clear and forceful warning about what lies ahead.”

Those who identify with Trump and the MAGA movement, for their part, immediately saw Biden’s comments as a declaration of war. “Did Joe Biden just declare war on Red State America?” Rep. Matt Gaetz, R-Fla., tweeted. “I sure hope not!”

And while Biden tried to argue that he was only taking aim at a limited group of pro-Trump activists, GOP leaders are seeking to frame Biden’s rhetoric as aimed at a huge swath of Americans. “President Biden has chosen to divide, demean, and disparage his fellow Americans,” House Minority Leader Kevin McCarthy, R-Calif., said on Thursday. “Why? simply because they disagree with his policies. That is not leadership.”

McCarthy also demanded that Biden apologize “for slandering tens of millions of Americans as fascists,” after Biden said at a Democratic fundraiser last month that many in the GOP were moving toward “semi-fascism.”

Still, few Republicans rushed to dispute the basic points of Biden’s speech – that many under Trump’s sway are working to undermine the fundamentals of American democracy, like the notion that people who lose an election should respect the results. Rather, many instead sought to move the discussion to Biden’s policies, attacking his record on inflation, crime and immigration.

“What would help the ‘soul of the nation’ much more than a condescending lecture from President Biden is getting inflation under control instead of actively spending more money to make it worse,” Sen. Bill Hagerty, R-Tenn., wrote on Twitter. “Or enforcing our immigration laws to prevent hundreds of thousands of American drug overdose deaths and the profound human suffering that has resulted from record-shattering illegal immigration.”

Michael Beschloss, a presidential historian who was among a small group of academics who met with Biden last month to warn that American democracy is teetering, said it was not surprising that those who were the target of Biden’s rhetoric would respond by dismissing it. “They would have to say the same thing about what Lincoln said in 1861 and what FDR warned about in 1938,” Beschloss said.

In 1861, President Abraham Lincoln was trying desperately to hold the country together as slaveholding states threatened to secede, and in 1938 President Franklin D. Roosevelt warned against rising fascism.

“For God’s sake, you cannot be afraid to critique your fellow man if they are doing something that is a threat to this country,” former senator Doug Jones, D-Ala., said.

Biden is not the only president, or presidential candidate, to criticize a broad segment of the American public in recent years, and to face potential political peril for doing so.

In 2008, then-candidate Barack Obama referred to some working-class voters by saying, “They get bitter, they cling to guns or religion or antipathy to people who aren’t like them, or anti-immigrant sentiment or anti-trade sentiment, as a way to explain their frustrations.” Obama’s rival in the Democratic primary, Hillary Clinton, quickly seized on the comments to portray Obama as insensitive to ordinary Americans.

In 2012, Republican presidential nominee Mitt Romney suggested that 47% of Americans are government freeloaders. “My job is not to worry about those people – I’ll never convince them that they should take personal responsibility and care for their lives,” Romney said.

And in 2016, Clinton, ran into her own problems when she estimated that half of Trump’s supporters could go into what she called “the basket of deplorables” – meaning, she said, that they were “racist, sexist, homophobic, xenophobic, Islamophobic.” The phrase turned into a rallying cry for Trump’s supporters, and after he was elected, some threw a “DeploraBall” to celebrate.

But each of those remarks was made offhandedly at a party fundraiser and was not intended for a wider audience; Obama, Romney and Clinton all apologized. In contrast, Biden’s charge that Trump and his followers represent “an extremism that threatens the very foundations of our Republic” was a carefully thought-out assertion made in a televised address.

One Biden adviser, speaking on the condition of anonymity to describe private discussions, dismissed comparisons to Romney’s and Clinton’s comments, listing the ways Trump and his allies have attempted to undermine democracy, from spreading lies about the 2020 election to supporting those who attacked the Capitol on Jan. 6, 2021, in an effort to prevent Biden’s victory from being formalized.

The adviser said Biden had no choice but to call out forces that he sees as a threat to American democracy, describing the outraged Republican responses as “performative.”

Former senator Bob Kerrey, D-Neb., who served in the Senate with Biden in the 1990s, said the president could have “ramped up even more” his criticism of the way Trump supporters have behaved.

“This was a mild criticism,” Kerrey said. “It is a form of fascism to say that we’re not going to have a peaceful transition of power.”

He added: “If he had not called it out, he would have regretted it.”

Opinion | The Second Amendment Gives No Comfort to Insurrectionists