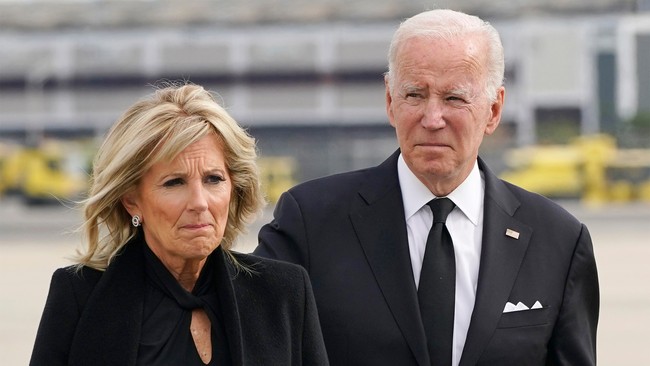 President Joe Biden and First Lady Jill Biden’s Thanksgiving holiday got off to a rough start when they called into the Macy’s Thanksgiving Day parade confused how the phone works.

Within the first 20 seconds of speaking to NBC’s Dylan Dreyer, Biden struggled to hear the reporter on the other line.

“Can you hear me, Mr. President?” Dreyer asked.

“Oh, I was so worried this call wasn’t going to go through,” said Dreyer.

When the two eventually connected, the Biden’s talked about how they made their yearly trek up to Nantucket, Massachusets to meet with first responders.

As always, no appearance would be made without Biden getting icecream, however, he instead pardoned two turkeys named after his favorite flavor: Chocolate and Chip.

Twitter erupted in a fit of laughs after the president struggled to get on the line with Dreyer.

So sorry, Dylan. You seriously need hazard pay for this one.

Uggh I would have let it go to voicemail

This Thanksgiving may look a little different for many families throughout the country thanks to Bidenflation.

Thanksgiving staples such as turkey, sweet potatoes and pumpkin pie skyrocketed in price by 23 percent compared to 2021.

Studies show that it is cheaper for familes to dine out for Thanksgiving rather than cooking dinner from scratch.

However, Biden continues to blatantly ignore the economy crisis and instead insists that everything is under control.

.@DylanDreyerNBC had to take a call during the broadcast — hello Mr. President @POTUS! pic.twitter.com/anB4DDEhOM

Kim Kardashian Slammed For Statement Over Balenciaga Scandal: ‘There Is No Grey Area Here’