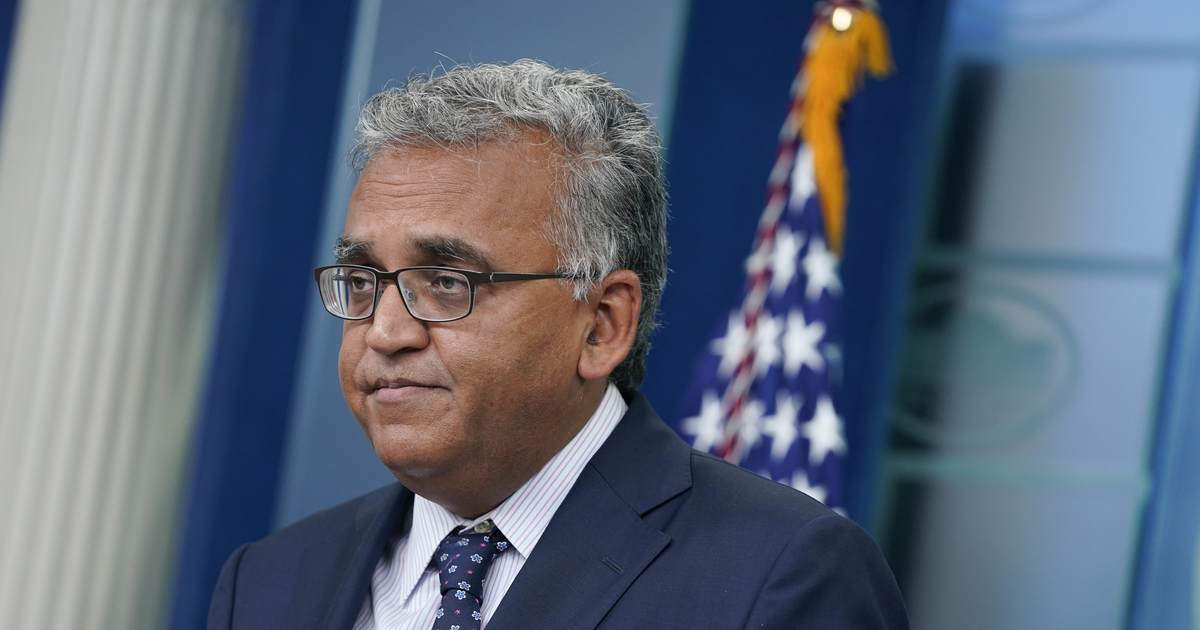 We’ll call them “Aphorisms by Ashish.”

WH Covid Coordinator: “You can get both your flu shot and Covid shot at the same time … I really believe this is why God gave us two arms. One for the flu shot and the other one for the Covid shot.” pic.twitter.com/KjOQcyzAZl

I really believe God gave us two hands to cover our mouth so that braindead takes like that don’t emit from it.

Of course, the useless HHS Secretary Xavier Becerra sits next to him with a dumb look on his face, probably one of the reasons he gets paid $226,000 annually.

This aphorism, as well as the delivery, is grossly irresponsible, especially since we are daily hearing the harms caused by the Pfizer and Moderna “shots,” including myocarditis and fertility. Harms that the corporations worked to downplay or hide. But this administration has to keep that COVID gravy train going. The new pivot? Let’s make “the shot” annual, just like the flu shot.

Notice they are shifting the language from “vaccine” to “shot”? They think we’re stupid.

Andy Slavitt, former senior advisor to Joe Biden and Medicaid/Medicare czar under Barack Obama, laid out the HHS game plan ahead of the briefing in a Twitter thread:

NEW: COVID vaccines will now be recommended annually, with the flu shot.

I spoke to the White House yesterday about the plan. 1/

Rather than an ad hoc schedule which confuses many as to when to get vaccinated, the thinking is that an annual shot will result in many more people getting vaccinated. They point to 2/3 of adults who take the flu vaccine vs 1/3 of adults over 50 who have been taking COVID. 2/

We have infrastructure, outreach, and habits that can be capitalized to get people their flu and COVID vaccines together. This is the prime benefit. But of course it comes with some questions they are preparing to address. 3/

It goes on, basically priming the pump, doing free PR for the White House. Come Wednesday morning, Biden issued a statement to the nation confirming this agenda. At least, the portion of the nation that is still paying attention to him after that godawful speech.

COVID-19 vaccines will largely become an annual vaccination akin to the flu shot, President Joe Biden said Tuesday as his administration urged Americans to seek out newly authorized booster shots tailored to fight the omicron subvariants that are now dominant.

“As the virus continues to change, we will now be able to update our vaccines annually to target the dominant variant,” Biden said in a statement. “Just like your annual flu shot, you should get it sometime between Labor Day and Halloween.”

Health officials held a briefing Tuesday after regulators cleared the new generation of coronavirus inoculations and threw open eligibility — calling on people age 12 and older to get another dose if they haven’t had one in the past two months.

COVID-19 vaccinations will likely shift to an annual injection — tailored to the latest strains — for the majority of the population, with more frequent doses offered for higher-risk people, the officials said. The latest version of the vaccine — the first approved in almost two years — will be available at pharmacies and doctors’ offices beginning this week.

Remember when everyone was against “normalizing” COVID and comparing it to the flu got you banned from social media?

Remember when Trump kept saying the coronavirus was like the flu and we’d have to learn to live with it and people lost their minds?

Many of the former White House medical bureaucrats seem to be on board with this, including former Trump Surgeon General Jerome “Still Masking at the Airport” Adams:

The story PANDEMIA tells – the true story of 2020 and 2021 – is a story of massive government failure across the United States and Europe. Every control measure the public health authorities promised would control the spread of the coronavirus – from masks to lockdowns to school closures – failed.

The failure did not occur because citizens didn’t cooperate.

They did, in a way that would have been unthinkable a few years before (and is frankly scary for those of us who believe civil liberties are the foundation of civil society). The failure occurred because the effort to eradicate a respiratory virus that posed little danger to most healthy people was folly from the start – a folly that came at massive human, economic, and societal cost.

Now that failure has spread to the COVID vaccines too.

No kidding. Ray Charles can see it. This push to normalize COVID two years after failing to “shut down the virus,” is just more smoke and mirrors.

Americans are tired of the attempts at illusion. Especially when their increasingly empty pocketbooks bear out the harsh reality.

The failure is now too obvious to be argued, much less hidden, which is why Britain just said it would drop essentially all COVID restrictions. Other countries will follow, probably as soon as the Omicron wave breaks.

For progressives, the failure is both humiliating and dangerous. Just over a year after Joe Biden’s election, it is provoking a major conservative realignment in the United States. The consequences are likely to last at least through 2024, perhaps much longer.

With the midterms on the horizon, it’s convenient that Biden wants to make this new vaccination push between Labor Day and Thanksgiving. Come November 8, you’ll either be too scared or too sick to actually make a difference.

No doubt, Ashish will have more aphorisms ready for the occasion.

The Empty Chair at the Holidays

Toyota’s Oct global vehicle production up 23%, above its target