Joe Biden harangued and threatened the nation for 20 minutes on national TV on Thursday in a speech that will be remembered for its vicious rhetoric and blood-red lighting.


In the highly partisan speech, Biden railed against MAGA America like there was no tomorrow—he used the words “MAGA Republicans” 11 times in the first 12 minutes. Some of the most-used words in the speech were: violence, darkness, threat, and politics. The most-used word was “democracy,” the Marxist-leaning crowd’s favorite term of derision for our republic.

But that’s all Joe Biden’s got right now. By nearly every metric, America is worse off than it was during the Trump years, so Biden can only resort to fearmongering and demagoguery.

For most politicians, Independence Hall in Philadelphia would be the perfect backdrop for a patriotic speech. But Biden’s handlers apparently thought it would be better to stage the boss’s dark rhetoric with blood-red lighting and shadowy Marines standing at attention, suggesting a cross between the 6th circle of Hell and a Fidel Castro rally.

Gotta say, Biden looks like he’s speaking from hell with those red lights as he talks about the “sacred flame.” pic.twitter.com/dDZuKHybFp

Some compared it to a Nazi rally.

Biden rehashes Nazi Germany like Rhetoric in asking people to confront MAGA voters- ( Like the Jews on 1930s ) Disgusting and dangers signs in US politics pic.twitter.com/6lYcaLzacg

CNN apparently watched the speech through rose-colored glasses. Notice anything different about the lighting here?

President Biden: “I believe America is big enough for all of us to succeed, and that is the nation we’re building — a nation where no one is left behind.” https://t.co/f7ekw5GlKK pic.twitter.com/cfCBajagD7

There were also echoes of Emmanuel Goldstein’s Two Minutes Hate in George Orwell’s 1984. 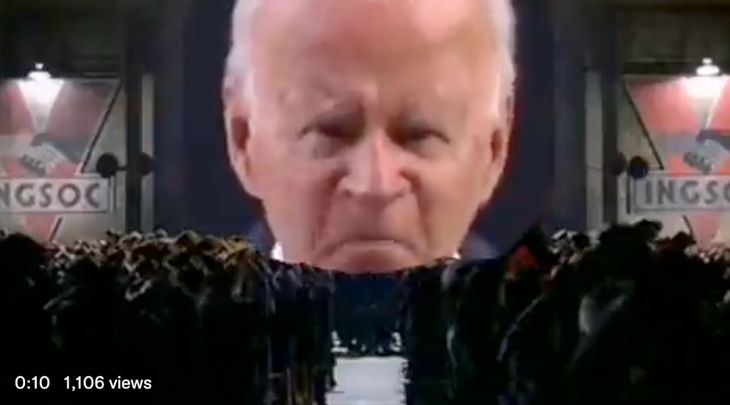 “MAGA Republicans have made their choice. They embrace anger. They thrive on chaos. They live not in the light of truth but in the shadow lies together,” Biden said of the 50% of Americans who did not vote for him.

While he made a passing reference to separating MAGA Republicans from others in the GOP, the rest of the speech suggested that he was indeed talking about anyone who opposes his left-wing agenda.

Tonight Joe Biden went to the place of America’s founding, flanked by troops, lit in red, and declared MAGA Americans enemies of the state

Judging by the cheers in the audience, I would guess that the crowd was largely bused in to cheer for their faltering president. But hecklers could be heard in the distance shouting “F*** Joe Biden.”

Biden gets DROWNED OUT so bad by “F**ck Joe Biden” chants he has to STOP reading teleprompter pic.twitter.com/w0q0aWu6M1

Biden concluded the speech with his characteristic confusion:

That was just weird. Biden ends speech with “God bless you all” and then randomly mumbles, “Democracy.” This man is not right. pic.twitter.com/qYieAqbmm2

Disgraced former FBI agent Andy McCabe says Biden didn’t go far enough threatening Republicans: “People would like to have seen a bit more references to accountability. There really wasn’t much talk about what we’re doing about those insurrectionists” pic.twitter.com/33f13ylDEG

Incidentally, none of the Big 3 networks—ABC, NBC, and CBS—carried Biden’s speech live. They’re apparently not down for the cause if it means losing bundles of money.

As President Biden addresses the nation in a prime time address, NBC is showing “Law and Order,” CBS is sticking with “Young Sheldon,” and ABC is airing “Press Your Luck.”

Tonight was a dark moment in American history, thanks to Joe Biden. It shows a man desperate and gasping at straws as he sees his presidency—and the country he claims to love—crumbling around him.

Also read: Joe Biden Has Always Been a Bad Person; No Wonder He’s a Bad President

There is a very real possibility that Biden will back up his threatening speech with actions. He may not round us up in ghettos (at least not in his first term) but make no mistake: He just declared war on 74 million of his fellow Americans. If Joe Biden gets a second term, there will be no stopping him and his fellow travelers in the media and in Congress. Our most sacred rights—freedom of speech, freedom of religion, freedom of association, the right to bear arms—could go away—poof—like all that student debt he just “forgave.”


With the 2024 midterms just a few months away, PJ Media will fight tooth and nail to preserve the America we all love—the country that scores of Americans fought and died for. For those of you who are not yet VIP members, we need you now more than ever. For a few dollars a month, you can help us fight Joe Biden, fight the corrupt FBI, and fight the liars in the mainstream media. Join today and use the promo code STANDANDFIGHT for a 25% discount on your membership.