Anniversary of U.S. Constitution is celebrated by nonprofit 917 Society | News 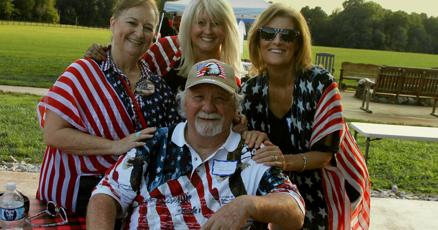 The 917 Society held its sixth annual Constitution Day Celebration Saturday, Sept. 17, the 235th anniversary of the signing of the Constitution.

The event was held at the Storytellers Hideaway and Museum, once the getaway farm of the late Johnny and June Carter Cash. About 225 people showed up to celebrate the Constitution, learn its history, impact and importance, and to be entertained. Several state candidates up for election or reelection attended to show support for the 917 Society, a nonprofit organization with a mission to pass on “the rights and responsibilities provided by the U.S. Constitution” to younger generations so this country will remain a Constitutional Republic.

President Abraham Lincoln, AKA Rodgar McCalmon, was on hand to help keep the program running, present the Founders Cup and talk to kids and adults. Tennessee state Sen. Kerry Roberts, one of the first to join the 917 Society nearly eight years ago, emceed the program, which included several speakers.

The event formerly opened with a blessing, the Pledge of Allegiance and a trumpet rendition of the national anthem by Dan Oxley, trumpet player with the former Dan Oxley Praise Band.

Teenage sisters Abigail and Madeline Archie presented the Preamble to the Constitution, which introduces the fundamental purposes and principles of the document.

Faro said he immigrated from Italy “because I believe this is the country I want to live and die in.”

Faro and his children are all naturalized citizens.

“I support and defend the Constitution and the laws of the USA against all enemies foreign and domestic,” Faro added.

Brian and Sally Oxley, owners of the venue and hosts of the event, are missionaries with a new mission.

“Johnny Cash loved this place,” Brian said. “When he was asked about the farm, he’d say ‘it’s the center of the universe.’ We want this to be a place to visit Johnny and God.”

Having spent most of his life doing mission work in other countries, Brian appreciates the freedoms the United States Constitution protects. He said this country has two issues — the question of life and the question of God. Both relate to the Constitution.

“John Adams said the Constitution was created for a moral people,” he said. “The problem in this country is spiritual. We have to fight for the Constitution. We can’t leave our nation the way it is now.”

C. Richard Archie, West Tennessee director for the Tennessee Firearms Association (TFA), has been studying the United States and the Tennessee Constitution for years.

When Tennessee presented its new state Constitution to Congress for approval in 1796, “Thomas Jefferson described Tennessee’s new constitution as the ‘least imperfect and most republican’ one of its time,” Archie said. “In our Constitution all powers are in Congress — we and they are the people. It’s ourjob to instruct our representatives.”

A representative from Project Appleseed provided a short history lesson about a few of the people who participated in the Revolutionary War.

After seeing the ravage of the Battle of Lexington and Concord on April 19, 1775, John Adams wrote to his wife, Abigail, “Posterity (addressing future people), you will never know the cost to this present generation to preserve your freedom. I hope you will make good use of it. If you do not, I shall repent in heaven that I ever took half the pains to preserve it.”

Project Appleseed is a nonprofit organization dedicated to keeping alive the timeless ideals and values of integrity, perseverance, commitment, civic virtue and personal responsibility demonstrated by the founders. They teach civic responsibility through colonial history and the American tradition of rifle marksmanship. For information go to https://appleseedinfo.org.

Abraham Lincoln (McCalmon) presented the 2022 Founders Cup to Arthur Carpenter, a retired Austin Peay professor with a PhD. in nuclear physics and mechanical engineering. He has supported the 917 Project for several years and is a Congressional Level Founders Club member.

U.S. Rep. Mark Green, a longtime supporter of the 917 Project, said, “I took that oath [to defend the Constitution] … when I was 17 years old on the plane at West Point. I solemnly swore that I would support and defend the Constitution of the United States against all enemies foreign and domestic. Never in my lifetime did I think the threats to that Constitution would be more domestic than they are foreign, but I believe they are.  … The biggest threat to the Constitution is ignorance.”

Every time he took the oath, which were many, it mattered.

But defending the document is not just for those who take an oath; it requires individual responsibility.

When 917 Society founder Joni Bryan discovered 99% of the population never read the Constitution and she couldn’t pass the citizenship test immigrants are required to pass to gain citizenship, she understood why there are generations of people who don’t know their rights and who believe the United States is a democracy when it’s a constitutional republic.

A federal law that went into effect in 2004 requires all schools receiving federal money to provide an annual class or program about the U.S. Constitution on or around Sept 17 — Constitution Day. Most don’t.

Bryan was inspired to do something. Her years as a social worker taught her, “if

you’re not part of the solution, you’re part of the problem.” Her solution was to get the Constitution back into schools and her research showed it should go into the hands of every eighth grade student in the country. To make sure it happened, it had to be at no cost to the child or the school, which meant fundraising.

“We are working hard to put our founding document back in schools so young people understand the importance of freedom,” said Bryan.

She started the distribution in Tennessee. Next year, just eight years after the idea formed, the Constitution, Bill of Rights, Declaration of Independence and the Oath of Citizenship will be distributed to schools in all 50 states reaching more than 3 million eighth graders.

“We are covering the country with Constitutions,” Bryan said.

The 917 Society also provides teaching aids and videos about the founding documents that are available upon request. For more information, visit www.917society.com.

Dems ‘Off Track’ Worrying More About Pronouns Than ‘Inflation’

The forgotten history of what California stole from Black families | California

Misconceptions and Inaccurate History Countered by The Gentle American

Author Willie Turner’s New Book, ‘Fear: An American History,’ Reveals the Ways in Which History Has Been Altered and Whitewashed and Aims to Teach...